A bout might only last 360 seconds, but for the 26-year old Tuks wrestler, that is enough as there is not a second she can relax. If she does, she is at risk of being pinned.

"A good contest often boils down to brain over brawn. If you are not strong, you got to outwit your opponent with good technique. In every fight, you got to give 100%.  I absolutely love the challenge.

"Wrestling has changed my life. It has made me more competent in the way I think about things. I am now able to make the right decision on the spur of the moment. It is something that stands me to good stead."

Honiball is a relative latecomer to the sport. She only took up wrestling at the age of 24. Before she did so, she was doing jiu-jitsu. The reason she switched was that she battled mastering the throws.

Her mom's only comment on hearing her daughter took up wrestling was: "It is fine my child but don't get hurt".

Last year Honiball won her first South African title. She does not consider it to be a highlight as she did not get to fight once as there were no opponents in her weight category.

"That is the reality of women's wrestling in South Africa. I have accepted that. I did not take up the sport to only win gold medals. It is about the challenge of trying to become a better wrestler. Each time I get to master a new technique is rewarding."

According to Honiball, often her most challenging encounters happen during training as she gets to grapple with men. There are times when it tends to sort of become a battle of the sexes.

"Men don't like to lose against a female. I guess it is sort of a pride factor that comes into play. More than often, our encounters are quite robust. I don't mind. It would actually upset me if they treat me like a 'lady" on the mats. Wrestling with men forces me out of my comfort zone. That stand me to good stead during tournaments."

Honiball is the first to admit that she still got to put in many long hard hours before she can claim to be a real champion.

She only recently moved to Pretoria. The best news for her when she joined TuksWrestling was finding out that Tanki Tau has been appointed as a coach at the club. He is also from Klerksdorp.

"Everything I know about wrestling is thanks to Tanki. We have been regular sparring partners at the Klerksdorp Wrestling Club. He has spent hours helping me master the finer intricacies of the sport. There is so much more I can learn from him."

Earlier this year during the Africa Senior Championships in Tunisia Tau won a bronze medal in the under-57kg category. He is also a double South African champion (freestyle as well as Greco Roman). 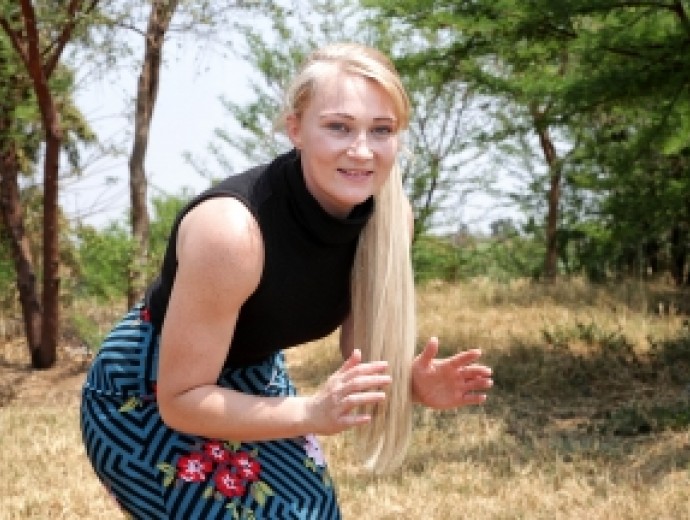