Tuks's Arno van Zijl achieved something few South African wrestlers have been able to do, and that is to win gold two years consecutively at the African Championships.
At the recent Junior and Cadet Championships held in Algeria, he won all four his fights to ensure he is crowned the junior under-74kg champion (under-20). During last year's championships, he won gold as a cadet (under-18). In 2017 he won a bronze medal.
There is a real chance that the Tuks wrestler could complete a "golden hat trick" next year as he will again be competing as a junior. He is in all probability going to miss out on competing at the World Junior Championships due to being in matric.
The quest for absolute perfection is, according to Van Zijl key to his consistency at the African Championships.
"I started to wrestle when I was four years old. It did not take long for me to realise that if I want to be a champion, I need to be dedicated. For the last ten years after every training session, I chose to stay behind to try and improve some specific technique which I believed would stand me to good stead. I guess all those extra five to 15 minutes are paying off."
According to the Tuks-wrestler to become a champion requires a strong mindset.
"Often, before I compete internationally, I find myself doubting my abilities. You can't have that. So I force myself to first win the fight in my mind before I step onto the wrestling mats.
"One of my most intimidating encounters was against a guy from Morocco. He had a really long beard which made him look older and more experienced. I had to convince myself that looks count for nothing. He also has only two arms and two legs. So it is a fair contest."
"Apart from a positive mindset, you got to be physically strong as well as fit when you wrestle. Wrestling for a few minutes at a time might not sound like a challenge, but it should be remembered that you need to be focussed every second you are on the mats. In your mind, you got to be able to think, actually strategise, as to how you are going to catch your opponent off-guard."
Rubin Jansen van Vuuren (bronze) and Kian du Toit (bronze) are the other Tuks wrestlers who medalled at the African Championships.
- Author Wilhelm de Swardt
Share this page
Published by Leonore Jordaan 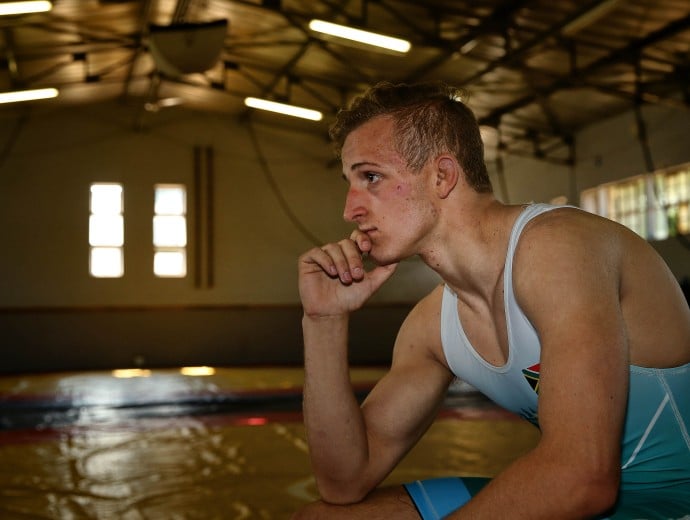