Chloe Brewis, an 11-year-old University of Pretoria TuksSport wrestler, has been bruised and even had her nose broken, yet she’s still standing. In fact it has only motivated her to work harder at her chosen sport.

Brewis has set herself a specific goal: to represent South Africa at the Youth Olympic Games in 2022. She certainly has the ambition to meet that goal – American female wrestler Helen Louise Maroulis, who won gold at the 2016 Olympic Games in Rio, is her role model – as well as the talent. Earlier this year, Brewis won a gold medal at a competition in Estonia and for the past six years, the young wrestler has been the South African champion in her weight category.

While her father, Morne, concedes that wrestling might not be a sport that many parents would want their daughters to take up, he remains open-minded about it. After all, his daughter was moved to take up the sport by his comeback as a wrestler, which he undertook in an effort to keep fit.

“I believe times have changed,” he says. “There can no longer be discrimination against someone based on their gender. I have made it clear to Chloe that I will support her in whatever she decides to do – on one condition: that she enjoys what she is doing.”

The biggest challenge that Brewis faces is lack of proper competition and training partners – which is why she has to compete against boys and primarily trains with them.

She’s sustained a few injuries along the way: In one fight she had her nose broken. Still, this has not stopped her from finishing what she started. She went on to contest her last two fights at the tournament. Even with a swollen nose and sporting a shiner, the young wrestler displayed surprising pragmatism for her age, saying “what does not kill you, makes you stronger”.

There was more bruising to be had, though. Her father says that initially when his daughter won a match, it did not always go down well. “There were definitely some bruised boy-parent egos.” Eventually though, Brewis’s rivals began to accept and even admire her.

“As far as I am concerned, wrestling is an ideal sport for any child to learn what discipline and perseverance are about,” her dad says. “From a physical perspective, wrestling rates as one of the best sports, because you have to use every muscle in your body, including the brain. Often during a fight, you find yourself in a situation where you have to think about what you are going to do. It is never only about brute strength.” 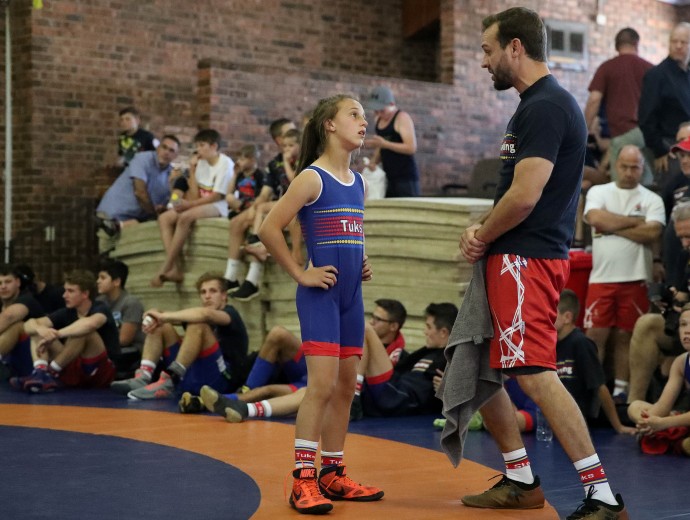