#TuksWrestling: Tuks wrestlers want to try and cause upsets at the World Championships

Five Tuks wrestlers will be representing South Africa from the end of the month at the Cadet and the Junior World Championships.

If the Tuks Wrestling's head coach, Neels de Jager, is to be believed there is a real chance of one or more of them winning a medal. Over the last two years, all of them excelled during the African Championship Tournaments.

Edrich Nortje is a former double gold medalist at the African Championships while Matthew Bartlett has won four silver medals.

According to De Jager, the draw at both World Championships could have a significant impact on the South Africans results.

"It is always better to fight one of the top-ranked wrestlers in your first encounter. No matter what the outcome might be, there is still a real chance to progress to the medal rounds through the repechage. If you lose to a weaker opponent in your first fight, it is game over."

As a joke, he added. "I tell the wrestlers when they can't pronounce the country which their opponent represents they should know that they are in for a real tough fight."

When asked Bartlett said it takes more than brute force to win.

"Mental toughness is half the battle. It serves no purpose to execute moves to technical perfection during training, but when it comes to competing, you don't believe in your abilities.

"Fitness is also of cardinal importance. A novice might not think it is a big deal to wrestle two-minute rounds.  What they don't realise is that you are active for every one of those 120 seconds. You never have the luxury to relax. That moment you do. It is all over."

Lehmkuhl relishes the challenge of outwitting a rival on the mats.

"To be competitive one needs to strategise every second of every fight. I tend to think about three grips I can use to pin my opponent all the time. If my opponent counters my first move, I should immediately to retaliate with another." 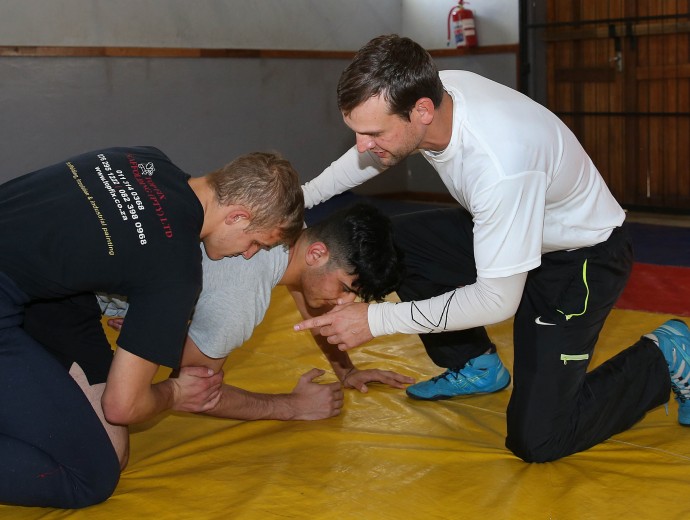