#TuksWrestling: Bartlett is not one for half measures when it comes to wrestling

For the past few weeks, Matthew Bartlett (TuksWrestling) has been in a constant battle to get the numbers on his bathroom scale to drop, but his real fight will start over the weekend when he steps onto the mats to compete at the South African wrestling trials in Secunda.

The 20-year old wrestler has set himself two goals for the season. The first is to qualify to compete at the African Junior Championships in Tunisia (26-31 March). In the past, he got oh so close to winning that coveted gold medal. Unfortunately, mistakes at crucial times meant he had to settle for silver on four occasions. It is the last time he is competing as a junior.

The Tuks wrestler is not one to do things in half measures. There is nothing he relishes more than a good challenge that is why he is also going to compete in the senior trials with the hope of that he might even be selected to represent South Africa at the All African Games in Morocco as well. He is of the opinion that the experience he will gain in doing so can stand him to good stead in his quest to try and qualify for next year’s Olympic Games.

Bartlett is actually still on the road to recovery after undergoing an ankle operation at the end of last year just after competing at the World Junior Championships. He only seriously started training in January again.

The time away from the wrestling mats had an unfortunate consequence. His weight ballooned to about 86 kilograms. Many would consider this to be a real problem considering he competes in the under-74kg category. However, he is not too fazed about it.

“If there is one thing wrestling taught me it is discipline and self-perseverance. I have been doing the Banting diet which makes losing weight easy.”

About maybe not being entirely fighting fit Bartlett said that his philosophy about wrestling might be his saving grace.

“For me, wrestling will always be about finding a balance being physically strong as well as being clever. At the moment I might not be as strong and as fit as I wanted to be which means I might have to outsmart my opponents. Next time I compete, it might be the other way around. I also don’t believe that there is ever such a thing as an easy fight. So I don’t underestimate anyone,” explained the Tuks wrestler.

Some wrestlers tend to refer to Bartlett as being part of the South Africa wrestling “royalty” because his whole family is involved. His dad and mom both serve on the South African Wrestling Federation management committee.

Bartlett is proud of his parent’s involvement especially as it all started because they were so passionate about supporting him. Unfortunately, it also has definite drawbacks.

“I believe I got to work twice as hard as any other wrestler to justify any selection for national teams as I don’t want people to claim that I got an unfair advantage due to my parents’ influence. In a way, it is not a bad thing.” 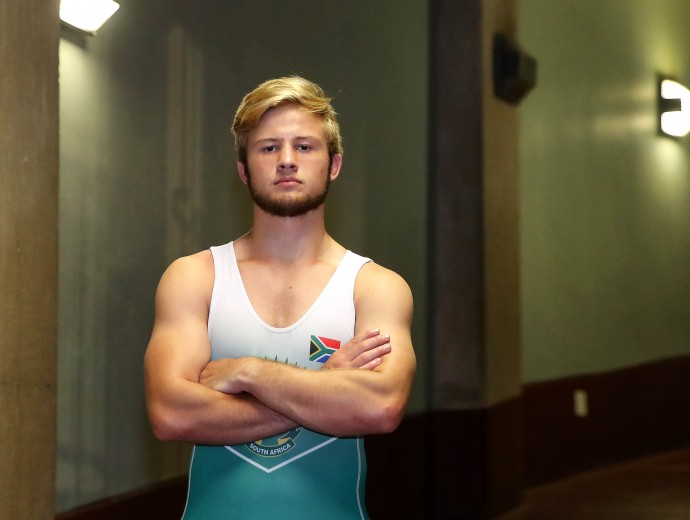