South Africa’s wrestlers gave a good account of themselves over the weekend at the African Junior Championships in Marrakech, Morocco winning no less than 18 medals (5 gold, 9 silver and 4 bronze).

Edrich Nortje (TuksWrestling) who won gold in the Cadets under-58kg freestyle category was one of the stars. He won all his fights without conceding any points. What made his performance outstanding was that he got to pin all his opponents. Very few wrestlers are able to do so at a tournament.

Nortje has been invited by the United World Wrestling Federation to attend their “More than Medals Training Camp” in Morocco.

For Ruan Botha who won gold in the Cadets under-85kg freestyle category, it was a case of patience being a virtue. Last year the Tuks wrestler had to withdraw from the African Championship because of a broken finger. Botha impressed with the way he fought in the final. He managed to pin his opponent after totally dominating the fight.

Brandon Kidson could be called the “comeback kid”. He quit the sport for two years only to start wrestling again last year. He won a silver medal in the Junior Greco-Roman under-58kg category. Up to the final, he managed to pin all his opponents to win his fights. He was beaten by points in the final.

Jaco le Roux won a silver medal in the Cadet under-100kg freestyle category. It was the first time that the Tuks wrestler had competed in the under-17 age group.

Judah de Beer lost in the Junior under-97kg freestyle final to the defending African champion. He impressed everybody with his agility, speed and power on the mat. He had actually retired but was convinced by the coaches of TuksWrestling to make a comeback. He only resumed training at the beginning of the year after an absence of 5 years.

Leanco Stans, the only female wrestler at Tuks won a bronze medal in the Junior under-66kg free style category, improving one position on her fourth place in 2016. She has represented South Africa at every African Championships since 2013.

Stans was given a bursary by the United World Wrestling Federation to train with some of Europe’s top female wrestlers in Finland as part of her preparation for the 2020 Olympic Games in Tokyo. She is the first female wrestler from Africa to attend the Academy. 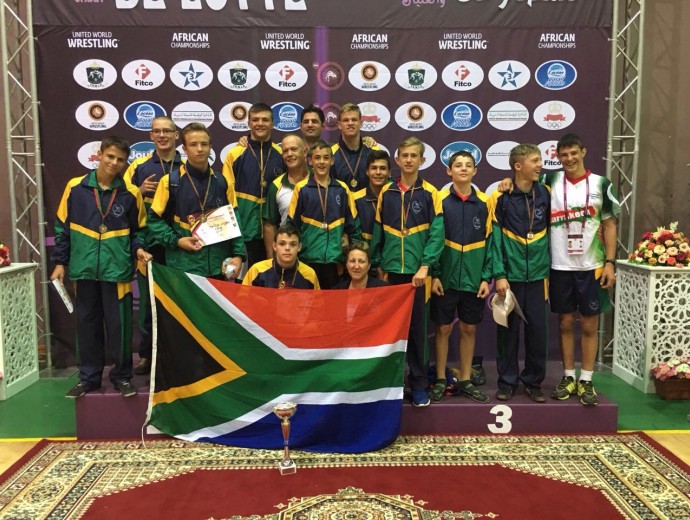