The first human case of Marburg virus in West Africa is no surprise: here’s why

The first case of fatal Marburg virus disease was identified in Guinea, West Africa, on 9 August 2021. Marburg is a highly infectious zoonotic haemorrhagic fever transmitted to people from fruit bats, specifically the Egyptian Rousette bat (Rousettus aegyptiacus). It spreads among humans through direct contact with the bodily fluids of infected people, surfaces and materials.

No cases have previously been reported in West Africa.

Marburg virus is part of the same family as the Ebola virus. Guinea’s detection comes less than two months after it declared an end to an Ebola outbreak that erupted earlier this year. It is also the same region where cases of the 2021 Ebola outbreak in Guinea and the 2014–2016 West Africa outbreak were initially detected. Zoonotic diseases will continue to emerge in areas where the reservoir host species occur, and opportunities for contact between humans and wildlife arise.

Marburg disease was first reported in 1967 by laboratory workers in Germany and Yugoslavia (now Serbia), transmitted from green monkeys (Chlorocebus sabaeus) imported from Uganda to Europe.

Since then, the Marburg virus has been reported in various parts of Africa in bats. The human disease has been reported from Angola, the Democratic Republic of Congo (DRC), Kenya, Uganda and an imported case in South Africa.

The latest detection in West Africa expands our knowledge of the incidence of spillover and human diseases to a new geographical area.

What does this mean?

For more than two decades after the first detection, scientists didn’t know how Uganda's green monkeys had got the disease. The host species – where the virus lives in nature – and epidemiology – how it spreads – weren’t understood. Then, in 1999, the Marburg virus was detected in bats for the first time, including the Egyptian Rousette bat in the DRC. This indicated that the host of the virus might be bats. The virus was detected and isolated from Egyptian Rousette bats in East Africa and South Africa in the following years, expanding the geographical range.

This bat is cave-dwelling and widespread throughout Africa, including West Africa.

The Egyptian Rousette bat has been confirmed as a reservoir host species of the Marburg virus. This was done through surveillance and follow-up experimental infections in a laboratory to investigate disease development in a controlled environment. When these bats are infected, they do not show signs of disease but can transmit it to humans and other animals, sometimes fatal.

Specific high-risk infection periods have been identified in bat populations, and birthing periods during the summer are reported to be a driver. These pulses coincided with the timing of human infections in Uganda. The Egyptian Rousette bat lives in caves or mines, and outbreaks have been linked to gold mining activities and entering caves with potential contact with bat faecal excretions or aerosols.

The geographical range where the Marburg virus has been detected in bats is more widespread than recorded human outbreaks. They coincide with the presence of the Egyptian Rousette fruit bat. However, surveillance has been sporadic and hasn’t covered all geographical areas in the past. Studies in West Africa have been minimal. Wildlife surveillance is severely lacking on several levels, including a collection of samples. Diagnostic capacity to test for these types of viruses is also lacking. The same is true for detecting disease in humans, especially when only a few cases occur in very remote areas.

From our knowledge of the epidemiology of the virus, it will be present wherever this bat species occurs. Environmental and man-made changes act as a significant contributor to disease emergence. These include changes in land use, human population growth and increased mobility across landscapes, changes in human socioeconomic behaviour or social structure, increased trade, forest fires, extreme weather events, wars, and breakdown in public health infrastructure, to name a few. These activities also result in increased contact with wildlife such as bats, ultimately leading to a higher risk of spillover. The Egyptian Rousette bat will also use abandoned mines as roosting sites, which may change their distribution.

As additional opportunities arise for spillover, more bat-borne viral diversity could probably spill over in the future. This is also true for the Marburg virus. In addition, more opportunities for contact between bats and humans will certainly lead to an increase in human infections.

This again highlights the importance of surveillance, quickly detecting these spillover events to prevent further human transmission, and building the in-country capacity to make the diagnosis quickly and efficiently. 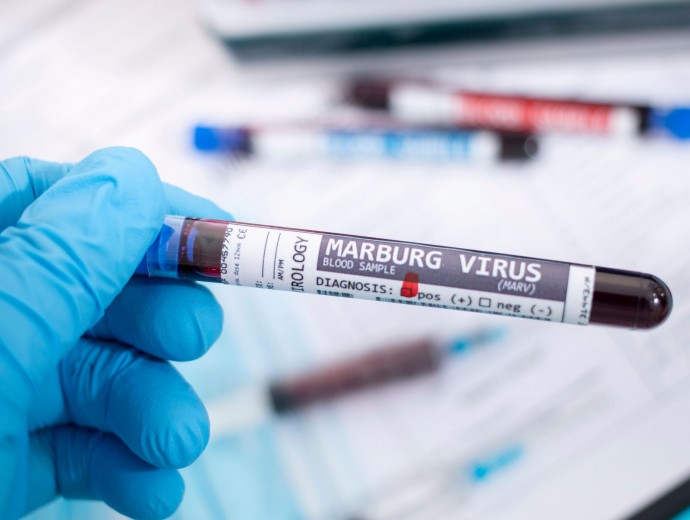