Anyone for whom winning a gold medal is as essential as breathing should consider playing underwater hockey.

Calista Pake, a national player and coach at Tuks, describes underwater hockey as a “breathtaking sport”.

“Think about it, it is possibly the only sport which requires teammates to forgo on oxygen to assist each other.  When I am under the water, I get a feeling of carefreeness. All that matters is to help my teammates win. If that means not breathing for 30 seconds and more so be it. A positive spinoff is that a lack of oxygen leads to a bigger adrenaline rush.”

The 19-year-old Pake had been playing underwater hockey since she was eight. It all started when her brother took up the sport, and her dad dared her to see how long she can hold her breath while being under the water. It did not take her long to get a liking for the sport.

Her passion and dedication led to her representing South Africa. She was part of the junior team that won bronze at the World Championships in 2013, gold in 2015 and again bronze in 2017.

When not playing or coaching she will try and convince anyone who is prepared to listen to take up underwater hockey.

“It is truly a family sport. Everyone can play. I know of an 80-year-old lady who is still playing. The only requirement is a passion for water, sport and love to challenge yourself. You don’t need to have swum before. I did not. The biggest challenge at first is to get to the bottom of the pool and remain there. If you can’t, you do so you won't be able to play the puck. As in any other sport, there are some specific skills players need to master,” explained the Tuks coach.

Underwater hockey is played at depths that vary from 1.5 metres to 3 metres.

Many might be worried as to how long they need to remain underwater. According to Pake on average it is about 30 seconds. She compares playing to running up a flight of stairs holding your breath.

“Luckily lung capacity is something you can work on. I know of people that are able to be under the water for more than two minutes, but it is not prerequisite.”

The only real drawback to playing underwater hockey is a lack of funding.  At a rough estimate, Pake reckons she has spent close to R250 000 over the years to play internationally.

An underwater hockey game on average lasts about 30 minutes. Two teams of up to ten players compete, with six players in each side in play at any one time. The remaining four players are continually substituted into the game from a substitution area.

Play usually continues until a goal is scored and the players return to their wall to start a new point. Sometimes the referee will signal a break due to a foul. 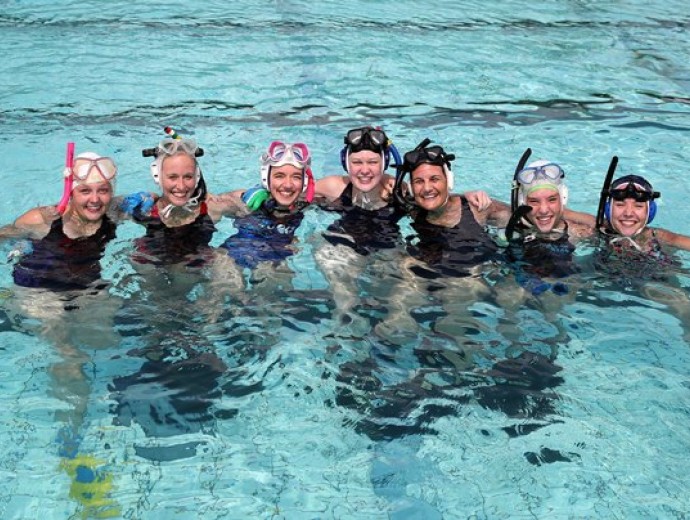