#TuksTennis: Tuks player motivated after being on court with tennis legends

There are not many Tuks athletes who at 15 can boast of having rubbed shoulders with two of the legends of international sport. Kagiso Ledwaba can.

The TuksSport Grade 10-learner had the honour of being a ball girl when Roger Federer played Rafael Nadal in Cape Town earlier this year. Even though she does not believe in hero-worshipping, she was impressed. It is, after all, not every day you get to be only metres away when two maestros display their remarkable skills.

The fact that Federer got to get the better of Nadal made the evening even that little bit more special to her.

"As far as I am concerned, Federer is one of the best. He has got that ability to make playing winners look oh so easy. But it is about more than that. You can't help but be overwhelmed by the compelling aura around Federer."

The Tuks tennis player certainly left Cape Town being more motivated. According to her dad, Geoph, for the week afterwards, one of the main conversation topics in their house was tennis or to be more precise how to go about playing more winners more often.

Tennis is sort of a family thing for the Ledwaba's. At 54 years dad, Geoph, still plays a mean game. Up to recently, he ranked as one of the ten best in the country in his age group. His eldest son, Khutso, went to study in the USA on a tennis bursary.

Kagiso's passion for the game got kindled by watching her dad and brother play. It did not take too long before she took to the court armed with a racket as well.

Who would win if dad and daughter would seriously faceoff on the court? There is no clear answer. It depends on who gets asked. Kagiso believes that on a good day, she can beat her dad, while he is confident that experience counts for more than youthful exuberance.

The one thing, however, dad has emphasised from a young age to his daughter is that being on the court is not about winning or losing. It is about playing the game and enjoying it.

It is advice that stood the Tuks tennis player to good stead over the last year. When she was still under-14, it looked like she could do no wrong. A definite highlight was winning an under-18 tournament in Limpopo. At the time she also ranked in the top ten in her age group.

Unfortunately, she got sidelined for quite some time. First, it was through a back injury and then by appendicitis. As she got back into the swing of things again, the Covid-19 pandemic happened, which meant more time away from the courts. It is knowing the joys that come with playing tennis that prevents her from being discouraged.

TuksTennis's head coach, Prince Madema, does not doubt that Ledwaba has the making to become a true champion.

"What excites me is Kagiso's potential. She is one of those players who motivate me as a coach to walk the extra mile. The most important for now is to work on her fitness and discipline. Hopefully, before long, she will get to play some matches again. That will help me to see on which facets of her technique we need to work on. I also need to prepare her for the challenges she is going to face when playing International Tennis Federation Tournaments." 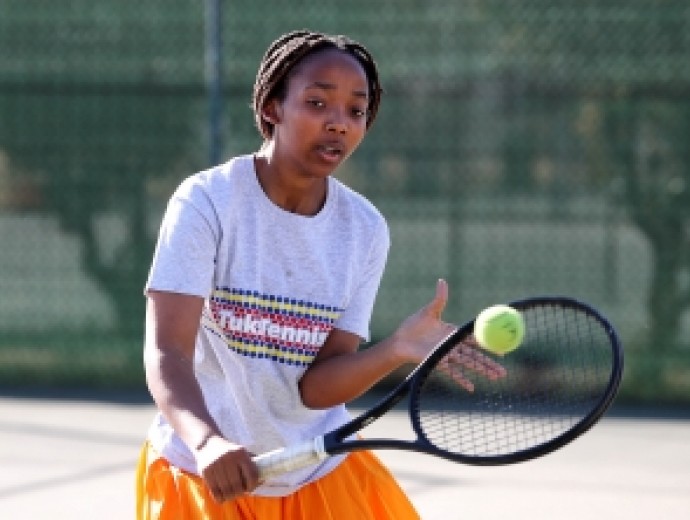