#TuksTennis: Maripa confident of being even better on the court at the 2021 Paralympics

The South African wheelchair tennis player, Evans Maripa, believes life is what you make off it that is why he is now more motivated to be at his best during next year's Tokyo Olympic Games.
Although the Tuks based player expected this year's Games to be cancelled due to the worldwide coronavirus outbreak, it was still a massive disappointment to him when the official announcement was made.
Maripa had competed at the 2012 London and 2016 Rio Games but believes he is now at a stage in his career where he could have upped his game when challenged by the world's best. He considered the semifinals in Tokyo as a realistic goal.
His confidence sprouts from his performance at the end of last year. He had won tournaments in Thailand and Bangkok. Seemingly he started to regain the form that enabled him to beat all of the world's top five players at least once over the previous few years.
"To reflect on what could have been, won't change anything. The Games has been postponed, and that is it. Now at least I got more time to improve my forehand."
Maripa can't help but gets excited when he talks about the forehand. He considers it as the best weapon in his tennis arsenal. That sound the ball makes when it hits the racquet's sweet spot to speed away at more than 100kmph to frustrate an opponent is what gets his adrenaline pumping time and again.
"Massive" is how Maripa describes his forehand. Then he laughs before adding that it is only going to get better. Especially since he now has got more than 365 extra days to refine, his technique getting the ball to be flying even quicker of his racket."
The Tuks based player was born with a congenital birth defect and had both legs amputated below the knees. There was a time when he felt that life had cheated on him.
"When I was a youngster, I did not want to do anything, but all changed when I got to a school in Limpopo. Some learners were in wheelchairs and could hardly do anything for themselves. I could not help but to want to assist them.
"Doing so led to me not seeing myself as disabled anymore. I am physically challenged. It means I can do anything I put my mind to. Feeling sorry for one is only excuse not to try out new challenges," said Maripa who before playing tennis was an avid wheelchair basketball player as well as a ballroom dancer.
In the built-up to the 2016 Paralympic Games, he was convinced to participate in a rowing trial selection exercise. The "numbers" he had put out were off the charts. Some wanted him to immediately change sports.
Maripa admits thinking about it for a second or two but then realised tennis was his true passion.
"Tennis changed my life for the better. It is also a way to help support my family. More importantly, I have not yet ticked all the boxes 'on-court' I wanted. There are still matches that needed to be won,” the Tuks based player said.
- Author Wilhelm de Swardt
Share this page
Published by Leonore Jordaan 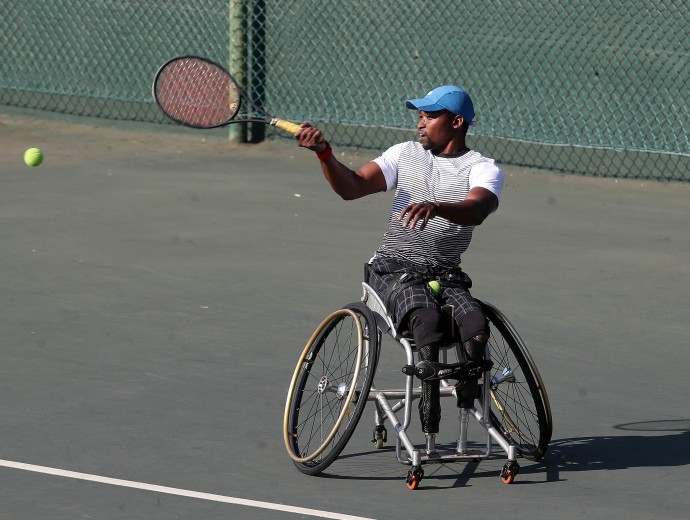