Donald Ramphadi is a rising star in international wheelchair quad tennis. In fact he has earned the name “giant slayer”, having defeated some of the world’s best players, including Japanese players Sugeno Koji, ranked six in the world, and world number 16 Shota Kawano, as well world number 3 Heath Davidson of Australia. And this after qualifying as a quad player only last year.

Yet Ramphadi was not always a fan of tennis; football was his game. But everything changed in 2006 when he was diagnosed with a severe bone disease. “The long and short of it is that my bones stopped growing,” he says.

The deciding moment arrived when someone came to his school, outside Tzaneen, to demonstrate wheelchair tennis. “At first I was reluctant to give it go,” he says. “Then again, I can’t resist a challenge. After hitting a few balls I realised I was actually quite good at it.”

Frustratingly for the tennis whizz, a lack of proper training is affecting his performance. There is, however, good news for talented players like Ramphadi: Tennis South Africa and TuksSport have joined forces to assist South Africa’s best wheelchair tennis players.

“It is great news,” says Ramphadi. “The greatest benefit is going to be having a proper support team. I will be assisted by some of the best sports scientists and coaches. Being based at Tuks also means my logistical worries will come to an end – Tuks is basically a one-stop facility, as everything I need is within ‘walking distance’.”

He is one of five players who has been identified for the programme: US Open finalist Kgothatso Montjane, two-time Grand Slam champion Lucas Sithole, Mariska Venter and Evans Maripa will also benefit from it.

Earlier this year, Ramphadi was instrumental in helping the South African wheelchair tennis quad team take home bronze at the BNP Paribas World Team Cup Tournament in Israel, having won his singles encounter, then teaming up with Sithole to win the vital doubles match against Britain.

Two weeks ago he lost to Sithole in the final of the South African Spring Open Tournament. They then teamed up to win the doubles.

Ramphadi considers his speed in the wheelchair and his serves as his most significant assets as a player. “But I definitely still need to work on my serve, as it tends to be quite erratic.”

Fortunately, he now has a place and programme to do just that. 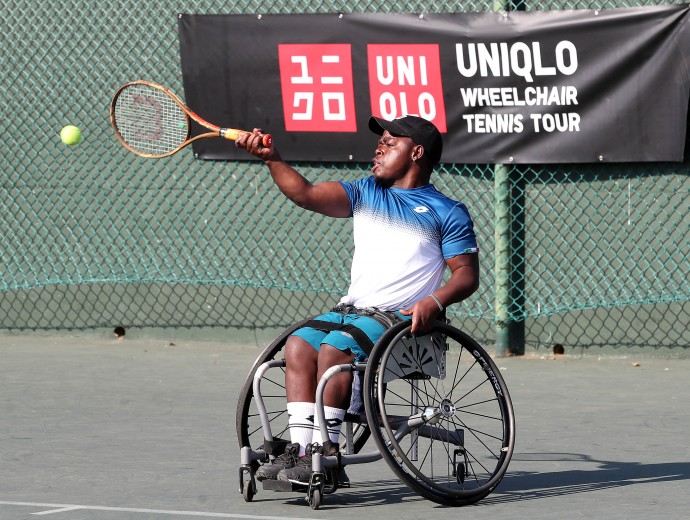