#TuksTennis: Simmonds could be the one to beat during the ITF World Tour Tournament at Tuks

South Africa's Chanel Simmonds will be one of the highest-ranked female players participating from next Monday in the ITF World Tour Tennis event at Tuks.

The 27-year-old Simmonds, who is currently 387th on the WTA-rankings, might also be one of the oldest players on the ITF-circuit. Age, however, can be misleading. She is now more committed than she was when she started out in professional tennis ten years ago.

"I fully realise there is no more time to waste if I want to fulfil my dream of again playing Grand Slam Tournaments," explains Simmonds.

2013's USA Open was the only time she competed in the main draw of a Grand Slam Tournament. Simmonds still considers being able to rub shoulders with the likes of Roger Federer and Serena Williams as inspiring. That is her motivation for upping her training this year and spending hours travelling all over the world.

"I got to improve my ranking. The only way to do so is by winning tournaments," said Simmonds who has already won three ITF singles titles this year. In total, she boasts with 21 single ITF-titles.

The highest she has ever been ranked on the WTA circuit was 158th. It was in 2013. Simmonds has been an integral player for the South African Federation Cup-team over the last ten years.

The ITF World Tennis Tournament at Tuks might boil down to age and experience versus adrenaline pumped youth. According to Simmonds, she tries not to dwell on the age-issue to often as it at times it tends to bring her down, but in the same breath, she adds that being older has stood her to good stead this season.

"During the tournaments, I won it was my experience that made the difference at crucial moments as I did not panic. When feeling pressured, I resorted going back to the basics."

She ascribes herself as a counter puncher when playing.

"I play mostly from the baseline trying to absorb the power from my opponent's shots to my advantage in an attempt to try and wear them down. To put it another way.  I am not the biggest hitter of the ball who can hit one winner after another.  Being left-handed definitely helps."

No surprise she is an avid fan of German, Angelique Kerber, who is a former world number one female player and winner of three Grand Slam tournaments. Kerber is also left-handed.

"I often watch her play, trying to pick up ways to improve my own game."

Her advice to young players trying to make it on the professional circuit is that hard works beat talent on any given day.

There is $15 000 (R225 000) prize money for the men's as well as women singles at stake during the ITF World Tennis Tournament at Tuks. More importantly, is the international rankings points that are on offer.

The Tournament starts on 30 September with the finals being played on 6 October. 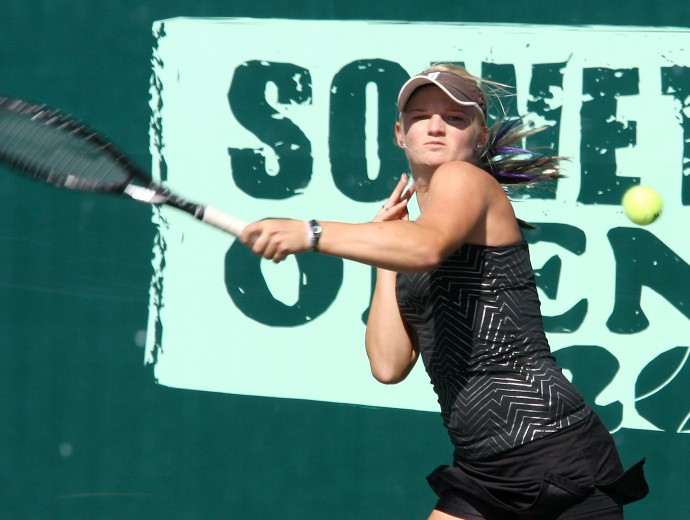