#TuksTennis: Venter might get to “act out” her dream at the Tokyo Paralympics

The Tuks based wheelchair tennis player, Mariska Venter, seems on track of maybe qualifying to represent South Africa at next year's Paralympic Games in Tokyo.

Over the last two weeks in Belgium, she was genuinely unsung. Playing two finals winning one.

She notched up one of the best's results of her career when she managed to beat Florencia Morneno, during the Ath Open Tournament in Belgium. The Argentine player is ranked 14th in the world.

During her quarterfinal bout, Venter made another of the world's top twenty players work for every point only losing in the third set to Michaela Spaanstra (Netherland). The score was 6-1, 6-2 and 7-6.

The week before she lost in the final of the Jens VanHerck Memorial Tournament against China's Hui Min Huang. Afterwards, she teamed up with Russia's Polina Shakirova to win the women's doubles.

Venter ascribed her competitiveness to a realisation that the time to qualify for the Paralympic Games is running out.

"I need to make the most of every opportunity when competing internationally.  As things stand, I need to improve my international ranking by 15 positions. Currently, I am ranked 38th," explained the Tuks player, who is on a training camp with the South African squad in Tokyo.

Wheelchair tennis is, without a doubt, a real passion for her.

"The moment I get onto the court, I feel like an athlete, I feel free from the limitation set upon me. Tennis saved me. It taught me that my wheelchair is not the reason for my limits, but my mind is. I don't believe in limits. If anyone ever tells me I can't do it, I work hard to prove them wrong."

It is precisely this mindset that led to her not thinking twice when she was approached to act in the popular Afrikaans "soapie" 7de Laan recently.

She played the role of "Eugenie" who encouraged and supported "Rickus" after he was in an accident that left him paralysed.

It would be thought that as a world-wise traveller who regularly pursues her Paralympic dream in front of fans that she would not too fazed to be on a film set.

"I have been privileged to see and experience many things, but nothing prepared me as to what it would be to be an actor. That first day on set, I was a nervous wreck being totally out of my comfort zone. It seems, however, I have not done too poorly. The fans seemed to take a liking to Eugenie.

"Getting to act in 7de Laan to me was an opportunity to try and make the viewers realise that even though as far as appearance is concerned paralysed people might seem different. We, however, still got the same dreams and passion as anyone else."

Venter's life changed dramatically in 2004 when she and her family were involved in a head-on head collision. Her father, as well as her eldest brother, died. She broke her back amongst other things and was left paralysed from the waist down. At the time she was only eight. 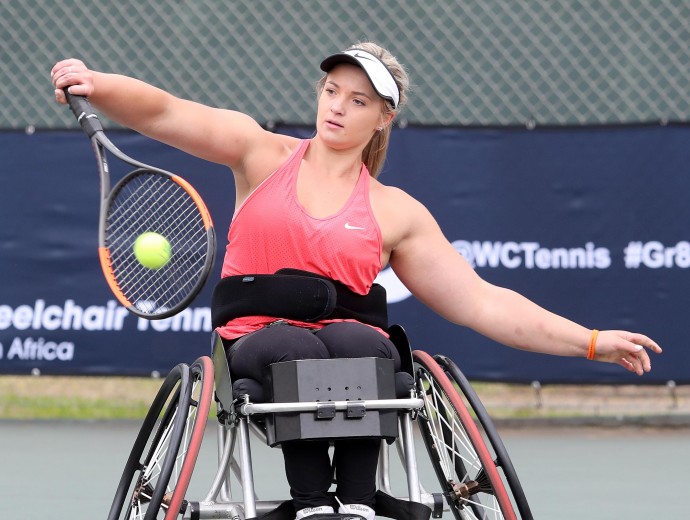