#TuksTennis: Tuks tennis players are trying to qualify for the World Beach Games

When beach tennis is mentioned, many would immediately think of people having fun hitting a ball around in sea, sand and sunny conditions.

However, the days of hitting balls with paddles, mostly during holidays are counted. Beach tennis has become a fast-growing sport since being officially recognised by the International Tennis Federation. In 2008 there were only 14 international tournaments. Now there are more than 300 tournaments with about R7 million prize money on offer.

The players from Italy, Spain, Brazil and Russia are currently dominating the sport.

Beach tennis has been included in the inaugural 2019 ANOC World Beach Games in San Diego (10 to 15 October) which is being organised by the Association of National Olympic Committees. A total of 15 sports have been included.

Tuks athletes have been known to be trailblazers so it should come as no surprise that two Tuks tennis players have taken up the challenge of trying to qualify for the Games. Kyla Yelverton and Helga Jeske know they are in for a tough challenge.

For them to qualify they need to improve their international rankings by at least 50 positions. Jeske is currently ranked 159th and Yelverton 179th which makes them South Africa’s top-ranked beach tennis players. They are confident that if given enough opportunities they will continue to become more competitive.

Qualified physiotherapist, Jeske best illustrated  her passion for the game by her exploits in January. She was on holiday in Brazil when an opportunity arose for her to compete in a tournament. Jeske had no hesitation in putting all plans on hold. There was no way she was going to miss out on playing.

She teamed up with Tatiana Machado from Brazil. They won their first-round match but got knocked out by one of the top women’s doubles combinations, Samantha Barijan and Flavia Muniz of Brazil.

The two Tuks players have been hitting balls since they can remember. Initially it was on tennis courts where they met facing each other in an under-12 tournament. They both went on to represent Tuks at the USSA Tournaments.

When Tennis South Africa started promoting beach tennis they decided it would be interesting to take up a new challenge. It did not take them long to get addicted.

“The main catch is that you can't let the ball bounce. Points in beach tennis are mostly won by playing volleys and smashes which make for quick, intense and exciting games. At high-level play it is challenging and packed with adrenaline and requires excellent physical fitness.

"Points start with a service and end when the ball touches the ground, forcing players to dive to reach difficult plays, similar to volleyball. The objective is to return the ball, with only one hit on each side of the net, as with tennis,” explains Yelverton.

Jeske added that on average a beach tennis game lasts up to an hour or more.

“Exactly the same scoring system is used as for regular tennis, except with the permanent use of no-Advantage after Deuce. Further, there is no second service, and no service let.” 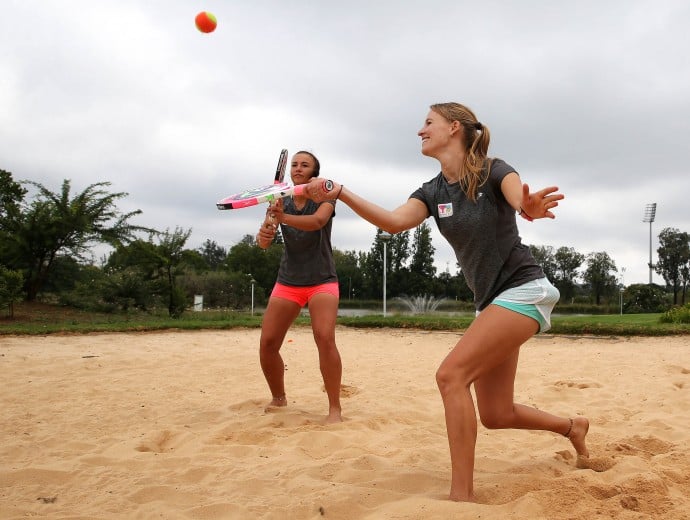