For Prince Madema coaching tennis at Tuks is all about ensuring his protégés have a fair chance to fulfil their dreams whether it is becoming professional players or just getting the opportunity to study at a university and living a healthy lifestyle playing tennis.

It seems as if he is succeeding. Four of the players he is currently coaching at TuksTennis will be based internationally later this year.

Talic Sibanda, Lethabo Malope and Paul Schwieger are all going to the USA while Joshua Seegers will be playing in Spain. When talking to them, it becomes clear that they view Madema as the one coach who is always prepared to go the extra mile. That is why they are now able to take on new challenges.

“While I was at TuksTennis he was like a mentor whom I could trust on and off the court. As a coach, he always encouraged me to make the most of any opportunity that presents itself. In doing so, he kept stoking that hunger to be better at what I am doing. I certainly would not be playing College Tennis in the USA if it was not for his passion,” said Sibanda who is enrolled at the College of Coastal Georgia.

Sibanda admits that at first, he found it tough going adapting to College tennis.

“In South Africa, we tend to play more defensively, but you can’t do so in the USA. You got to play aggressive going for every point. If you don’t, you will never win any matches.”

Sibanda is quite small of stature, but he does not view it as a handicap. He firmly believes that smaller players can hold their own against bigger and stronger rivals citing the Spanish player David Ferrer as a case in point.

“When in his prime Ferrer made up for what he lacked in size with guts, court savviness and a never say die attitude. It is something I am trying to emulate. That is why you will always see me trying to chase down that one extra ball to try and wear my opponent down,” explained Sibanda whose immediate goal is to try and become an All American in college tennis in a year or two from now.

Officially Seegers is going to Spain because he wants to master playing on clay. He views playing on it as being the ultimate in tennis. But when goaded by Madema Seegers admits there might be an alternative motive. He has heard rumours about the beauty of the Spanish women, and he wants to see for himself if it is true.

“Who knows just maybe my future wife is going to be Spanish. I am only joking. I am serious about trying to make a career from tennis. As a junior I had the privilege of training for a bit in Spain, and I was impressed by the player’s dedication. I am sure if I get to train and play against them for longer the standard of my game will improve.” 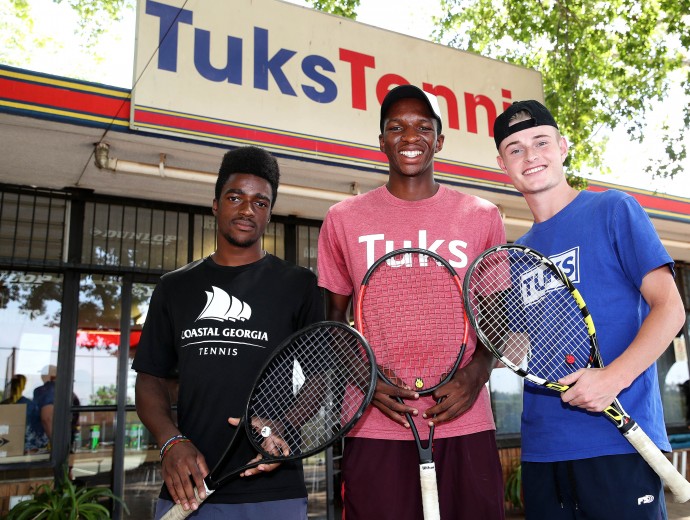