Exposing the secrets of desert extremophiles

Hardy cyanobacteria in the Namib Desert rely on rock shelters and opportunistic water consumption to safely carry out photosynthesis and survive.

It’s 3:30am on 14 April 2018, and biophysicists Tjaart Krüger and Michal Gwizdala are sitting on a desert mountaintop in the southwest African country of Namibia, examining small rocks. They are searching for thin films of bacteria that cling to life on the underside of small quartz pebbles.

Unlike the insects and other creatures that live on the desert’s gravel plains, these so-called hypoliths cannot escape the relentless Sun or forage for food—they must find ways to photosynthesize. But in the Namib Desert, where the Sun scorches the earth and rain occurs once or twice a year, if at all, photosynthesis can be dangerous. Exposure to excessive UV radiation and a lack of water can lead to DNA damage and buildup of reactive oxygen molecules. That’s what makes the bacteria eking out an existence so intriguing to the two biophysicists.

In a paper published earlier this year in Environmental Microbiology, Krüger and Gwizdala, of the University of Pretoria in South Africa, and their colleagues showed that these photosynthetic cyanobacteria have a novel strategy to cope with the harsh environment. Using a mixture of physics, biochemistry, and metagenomics, the team found that the bacteria shut down their photosynthetic machinery for most of the year before springing into action once water is available. They are saved from certain death by their quartz rock homes, which allow enough light for photosynthesis but reduce its intensity. “The Namib Desert is one of the most interesting for the study of photosynthetic organisms that live on low levels of water in deserts,” says Chris McKay, a senior scientist at NASA’s Ames Research Center. “This paper addresses the key question of how light gets through the stones and how the organisms make use of it.” Insight into how such microorganisms survive these punishing conditions and how they photosynthesize could prove important for understanding how life can respond to extreme conditions on planets such as Mars.

Once the Sun has risen in the Namib, the autumnal temperature will shoot beyond 40 °C. But in the predawn hours there is a cool breeze and only starlight. In the darkness, Krüger and Gwizdala, who have sampled and collected rocks from three different sites in the desert, use fluorometry to measure the bacteria’s photosynthetic capabilities, lifting the stones and touching a probe to the green film of microorganisms underneath.

Along with absorbing light, photosynthetic organisms emit it through fluorescence via their green pigments of chlorophyll. Measuring the light absorption and emission can yield information about an organism’s ability to photosynthesize and the microbial community’s metabolism, Gwizdala says. The probe contains an LED that shines light onto the bacteria and can also detect and analyze emissions between 680 and 900 nanometers.

The Sun has crept over the horizon by the time Gwizdala and Krüger are finished surveying the mountaintop rocks. It takes 20 minutes to drive across the silent early-morning landscape toward the white water tower that rises above the gravelly plains and red dune sea. This is the distinctive outline of the Gobabeb Namib Research Institute, a scientific outpost in the middle of the Namib. Krüger and Gwizdala put the rocks into a darkened humidity chamber and hydrate the desiccated bacteria. Once the bacteria have been fully hydrated, the researchers lay their stones back on desert sand with the bacteria facing the ground, exposing the rocks to full Sun before remeasuring the bacteria’s fluorescence.

After removing the thin green film for genetic and pigment analysis, Krüger and Gwizdala scrub the rocks clean to investigate their optical properties. Using a spectrometer, they measure the intensity and the wavelength of light that makes it through the stones. They say that only about 3% of the photons that hit the surface make it through to the bacteria underneath. The quartz rock also lengthens the light’s average wavelength by disproportionately absorbing shorter wavelengths—the stones do not transmit any of the energy-rich blue and UV light that is so dangerous to life.

Because of its stone niche, the bacteria do not need the adaptation tricks that other plants, algae, and bacteria have developed in such inclement environments, the researchers determined. A 2019 study had found that some organisms have adapted special mechanisms to expand the spectrum and photosynthesize using far-red light, which is less efficient for photosynthesis but gives them an advantage in relatively shady or filtered-light conditions. Gwizdala and Krüger expected the Namib bacteria to do something similar, given the extreme environment and the fact that the stone-filtered light is relatively red, but it appears that the hypoliths opt for efficiency. In the rare times when water is available, they photosynthesize as efficiently as possible and accumulate safe energy for the lean months ahead.

With the rock providing protection, the bacteria don’t have to worry about solar radiation damaging their photosynthetic machinery; instead, they can conserve energy when it’s dry and then spring into action when a rain event arrives. When they don’t have water, the bacteria shut down their photosynthetic machinery completely. In fact, when Krüger and Gwizdala’s colleagues at the Centre for Microbial Ecology and Genomics (CMEG) at the University of Pretoria performed a metagenomic analysis of the DNA under the rocks, they did not find the microbial genes usually associated with high light stress.

“We went to the Namib with the preconceived idea that hypolithons are living in a permanently stressful environment and have a range of photoprotection mechanisms permanently switched on,” Krüger says. But their research has shown that’s not the case. The extremophiles’ main threat is a lack of water, not solar radiation.

Along with exposing the secrets of life that thrive in Earth’s extremes, these habitats give scientists an opportunity to study environments similar to those on other planets—both at the moment and in the past—and how life can inhabit these places.

“From a NASA perspective this [research] is quite interesting for the implications for life on Mars in the past, as the climate on that planet became drier over time,” says McKay. “These desert photosynthetic communities could be examples of the last stages of surface biological production on Mars.”

As for Krüger and Gwizdala, they hope their research will show that fluorometry and spectroscopy should be part of the “standard toolbox” for experiments in microbial ecology, and that such methods should be replicated in other extremely dry deserts in the world, such as in the Atacama Desert in Chile and those in the Antarctic.

Physics Today, the flagship publication of the American Institute of Physics is the most influential and closely followed physics magazine in the world.

The Centre for Microbial Ecology and Genomics (CMEG) at the University of Pretoria performed a metagenomic analysis of the DNA under the rocks - credit to Prof Don Cowan and Dr Pedro Lebre. 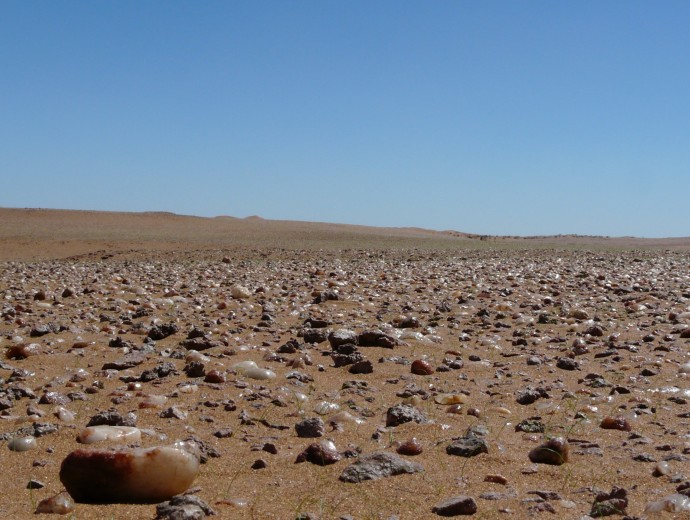