Students reflected on South African and UP heritage as part of this month-long competition.

The UP Museums Heritage Month Competition asked students to brag about the artworks they see on any of the UP campuses and/or at the UP Museums located in the Old Arts and the Old Merensky Buildings.

They could also take a walk on UP campuses, pass by one of the sculptures on the route, and take a memorable image or selfie with one of the artworks. In no more than 150 words, students then had to share their experience and thoughts on the artwork or describe how it relates to the discipline they are currently studying.

Prizes were originally planned for just the top three entrants, but this was extended to the top five students because students entered extraordinary responses. Several items were awarded to the winners including copies of the book National Treasures: The Mapungubwe Gold Collection of the University of Pretoria.

The winners are listed below.

Shamina Warona Maila began with a question about the purpose of celebrating heritage: “What is Heritage Month? Heritage Month is a period within the year that is designated to celebrate and acknowledge various ethnic and marginalised groups. It is a time not only to celebrate, but also to educate others on various groups’ histories and contributions to ditšo tsa rena (our culture).” She further engaged with one of the portrait sculpture artworks in the museum exhibition by Zelda Stroud, titled Nelson Mandela (2017). “As a law student, every time I see the sculpture of Tata Nelson Mandela, I get motivated, because I know he was also a law student, and against all odds he made it, even though sometimes things turned south on his side. But in the end he was a qualified legal practitioner. Because of his hard work and discipline, he managed to be a good leader.”

The second prize went to Xongi Masiya, who described the sculpture artwork by Michael Teffo titled Pensive Rabbit (2020) and how it relates to the discipline she is studying. “The artwork articulates the story of the tortoise and the hare, sculpted as part of the small series of five works and is my outstanding exhibition in the UP Museum. This exhibition under the degree of the study of theology represents Salvation, Diversity, Unity, Deliverance and Redemption. These characteristics encompass one’s being to reduce underestimation of others, while taking into account Humanity and Uniqueness. HAPPY HERITAGE MONTH AND ALSO SCHEDULE A VISIT TO THE UP MUSEUMS!”.

The third prize was won by Nongqibeko Titi, a BCom student from the Faculty of Economic and Management Sciences. Her entry applied her personal experience and knowledge gained from her studies towards a portrait sculpture artwork by Mike Edwards titled ‘Prof. Eddie Hamman, 1980’. She began with a quote which says, “There’s no coincidence, there’s fate”. She shared her personal experience as a UP student by saying, “I remember when I saw this statue of Prof E.M. Hamman, I was intrigued into coming closer, and that’s what I did. When close, I realised that the message below it was written in Afrikaans, and I couldn’t understand it all. However, I took the picture regardless, as I could not resist Prof’s friendly face. After research, I found out that I was standing next to the former Vice-Chancellor and Rector of the University of Pretoria, who served for eleven and a half years. With this scenario, I have realised that I have used what I learnt in law, which is ‘History and research will help you to find the truth’. As a law student, I got to apply my knowledge to find out that I was standing next to the great. Later, while on Instagram, I found out that there was a competition running. I can’t let this opportunity pass me by, as I believe there’s no coincidence, there’s fate.”

Two more students were awarded prizes for their participation. The fourth prize went to Chanri Theron from the Faculty of Economic and Management Sciences, who’s studying towards an honours degree in industrial and organisational psychology. The fifth prize was won by Jan Koketso Ndlovu, who is studying mathematics and statistics. To see more entries, check out the UP Museums Instagram page @UPMuseums.

The UP Museums team would like to thank all students who participated, and to extend our gratitude to the Department of Institutional Advancement (DIA), which sponsored prizes and marketed the competition throughout all UP campuses. 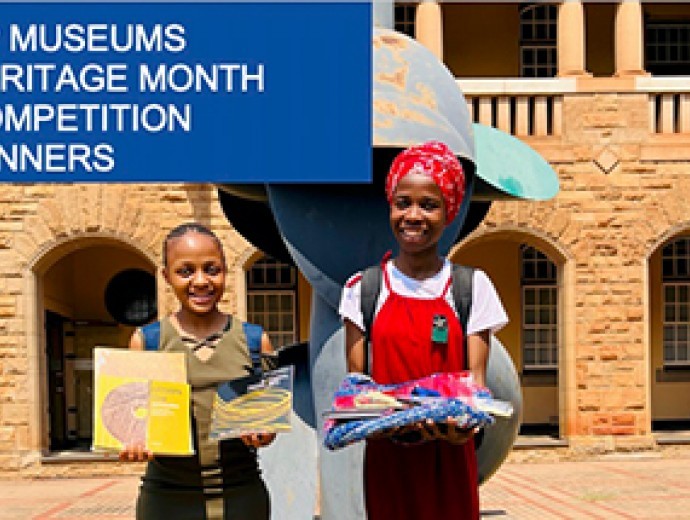