Earthly, garden and architectural delights at UP

The University of Pretoria (UP) contains significant and unique collections that are both natural and cultural. These include important resources, spaces and places of knowledge for academic enquiry, which are accessible to the UP community and exist to serve society.

GLAM, which is an acronym for Gardens/Galleries, Libraries, Archives and Museums, is an initiative that was launched in 2020 by the UP Museums in partnership with the Alumni Relations Office in response to the COVID-19 pandemic. GLAM brings people together to harness and promote UP’s diverse collections. This small task team is taking an inclusive lead in creating awareness around the University’s cultural heritage and natural heritage, both of which are recognised as active agents of a more sustainable future.

Gardens have been depicted through art for centuries to tell stories of history and religion, to relate mythical narratives or to highlight the relationship between the artist and the natural spaces that inspire and surround them. Gardens are also spaces for comfort and inspiration for those who engage with them as they become enveloped by space and time.

UP’s first gardens were founded in 1908 together with some of the institution’s first buildings. Both the UP Museums and the University’s botanical garden are committed to conserving the cultural and natural heritage of UP, and actively support research and teaching. GLAM brings together these two incredible resources that have been part of UP for 114 years and will hopefully inspire future generations on Hatfield campus.

The periods of these works also diverge, with the oldest artwork, of the Old Arts Building by Bevington, dating to 1929. The paintings are all partially created with the artist painting from within the physical landscape, thus enveloping the artist into the space that he or she is portraying. Although the buildings are the most prominent element in these works, the gardens accentuate the architecture, making it settle into the campus landscape through the use of natural elements like trees, plants, bushes and flowers.

In both of Manduell’s watercolours – of the Old Arts Building (1962) and Old Merensky Building (1962) – the artist portrays her work within the “gardenscape” and allots equal importance to the iconic buildings. The gardens in both paintings invite the viewer into the spaces where people may want to enter and explore both the architectural wonder of the structures and the gardens. It is only in the painting of the Old Merensky Building that Manduell introduces people by featuring them alongside the buildings. This artwork depicts a landscape of trees and a grassy courtyard with people entering the building.

Manduell’s depiction of the Old Arts Building (1962) features the beginnings of the Rautenbach fountain, in front of which is a small cannon flanked by flagpoles. From 1 May 1950 to 1 January 1960, the UP had an artillery battery (1 Observation or P Battery) on campus. This became the University of Pretoria Regiment from 1960 to 1975. In the early 1960s, the regiment was housed in the Old Arts Building before it was moved in the 1960s. The small cannon was made as a replica of the famous Ras Cannon, which was used during the 1838 Battle of Blood River. The cannon was donated to the Brits Commando in 1989 when the UP Military Unit closed.

In this pre-war watercolour by Elizabeth Rampa, the Old Arts Building is portrayed from an unusual perspective. The University’s iconic jacaranda trees and climbing ivy are the main elements of the work. The tree is in the foreground and partially in the background. The purple flurry of its flowers is highlighted against the distinguished red roof tiles and ivy rising along the sandstone of the Old Arts Building. The tree throws a purple shadow and there are fallen blooms under it, as well as a winding sand path lined with stones to a courtyard. The tree also indicates the season in which the painting was created, pointing towards October or November, when the jacarandas are usually in full bloom.

The tree must have died, and was replaced with a river bushwillow. As a first-year student representing the class of 2001, Rizqa Carrim planted the tree on 22 January 2001 as a symbol of study and development at the university and for future alumni.

This 1929 oil painting of the Old Arts Building is by British artist William Bevington, and is one of the oldest artworks of this building in UP’s art collection. It features a veld-type foreground and looming rain clouds in the background, and depicts a period when the Old Arts Building was enveloped invasively by ivy. According to Jason Sampson, Curator of the botanical garden, the ivy on the building was the so-called Boston ivy, native to the East Coast of the United States, which explains the source of the phrase “Ivy League university”. In 1991, the ivy was removed from the building as a result of the large-scale damage it was doing to the historic sandstone.

In the painting, rain clouds create dark shadows along with the trees entering the picture plane, and draw the shadows towards the beginnings of a garden and small water feature. Parts of the lawn are green, with some flowers in bloom, suggesting this was painted in spring. The building appears heavy, quiet and empty with bare sand as a courtyard, suggesting no personal interaction with the landscape space.

The most interesting section of the artwork is the depiction of red roof tiles, imported from England, like other buildings on UP’s grounds, like the Old Chemistry and Zoological buildings. In 1940, a devastating hailstorm demolished the roof of the Old Arts Building and in the middle of the Second World War, the roof was replaced with local, more affordable black slate tiles.

In a tertiary education context, a university garden landscape is often metaphorically used as a place or space for intellectual engagement and thought. Over time, the buildings, as well as the gardens, have accumulated layers of history, as the cultural and social landscapes change within the broader “landscape” of space becoming more social. The “gardenscape” changes with time, as it can be modified with plants best suited to the season.

In the current context, these social spaces, now the museum buildings and beautiful gardens, no longer occupy only a place in history on the artist’s canvas. Instead, they are transformed into engaging spaces that reflect both the natural and cultural art of Hatfield campus. These artworks form part of the permanent collections of UP and are curated, cared for and conserved for future UP generations and beyond. 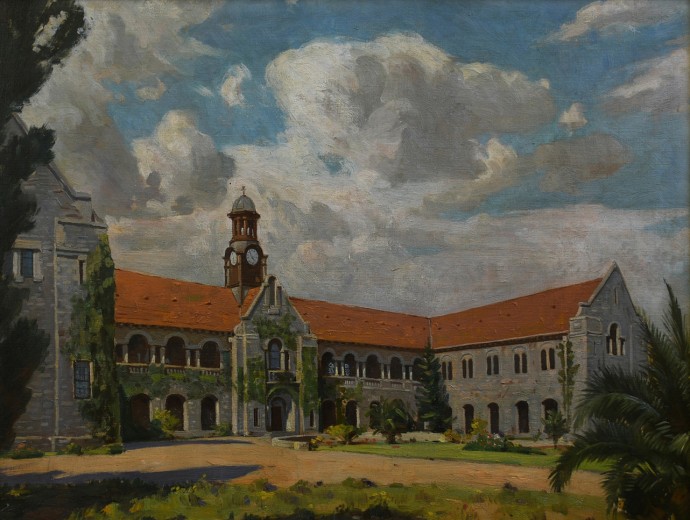