Fully titled The Discovery of the Sea Route Round Africa and almost 13 metres long, this colourful, intricately detailed painting depicts the discovery of South Africa, and has served as a source of robust academic discussion at the University.

“The Discovery is a very important work by an important South African artist, from a critical era in the political evolution of this country,” says Javett-UP CEO Lekgetho Makola. “It was an anchor to our education mediation activities for both school learners and university students. The work’s problematised layered quality evoked both celebration and critique; it became a source of robust dialogues and reflections on our current and future histories within the decolonial frame. I hope that the conservation of its physicality remains in the public discourse.”

In the late 1950s, Preller received arguably his most famous commission, to paint The Discovery mural for the Transvaal Provincial Administration. It took him four years to complete (1958 to 1962) due to its painstaking detail and he had to create a purpose-built gallery to work on it.

The painting was mothballed for decades in a dilapidated, disused building in Pretoria, when seven years ago, the University of Pretoria (UP) negotiated with the Gauteng Department of Infrastructure for it to be exhibited at the new Javett-UP art centre. After nearly 30 years, Preller’s colourful work adorned the foyer of Javett-UP, from 24 September 2019 to 20 April 2021. Over this period, visitors could enjoy viewing a rare artwork that had once been hidden for almost three decades, within the contemporary setting of one of Pretoria’s new art spaces. Space needed to be made for new exhibitions within Javett-UP in 2021, and so it was inevitable that Preller’s work would need to be reimagined into a new, public and accessible space.

On 21 April 2021, The Discovery was safely relocated to UP’s Hatfield Campus under the curatorial guidance of Gerard de Kamper, Curator of the UP Museum Collections, and Lelani Nicolaisen, Curator of Art Exhibitions & Galleries, under the watchful eye of the Department of Security Services. The work is intended for permanent exhibition within one of UP’s museum galleries, but is yet to be mounted for the public. The University looks forward to reinstalling this famous artwork and engaging with the discourse around its subject matter. Likewise, when back on open display, Preller’s work will also be accessible for research, teaching and training use, and ongoing art preservation within a secured museum gallery.

Like with all artworks that are ageing and deteriorating, the Preller painting is subject to structural instability, deformations such as planar distortion, tears, holes, paint loss, flaking, interlayer sliding, poor handling and many other kinds of damage that such an immense varnished oil painting may sustain. Monitoring and intervention for art conservation have become a priority for this artwork. The painting will eventually be mounted into a controlled and established museum environment where it can be regularly monitored by the museum art conservator Sandra Markgraaf.

“While the long-term loan of the Preller to the University of Pretoria remains under negotiation, the artwork now has a fitting future home. This work combined with the already extensive and impressive art collection curated and preserved by the University. The UP Museums have worked endlessly for nearly seven years to obtain permission for the loan to the institution, and are pleased that one of Preller’s most famous artworks is under the curatorial and conservation care of specialists within its new future home”, says Head of the UP Museums Dr Sian Tiley-Nel. 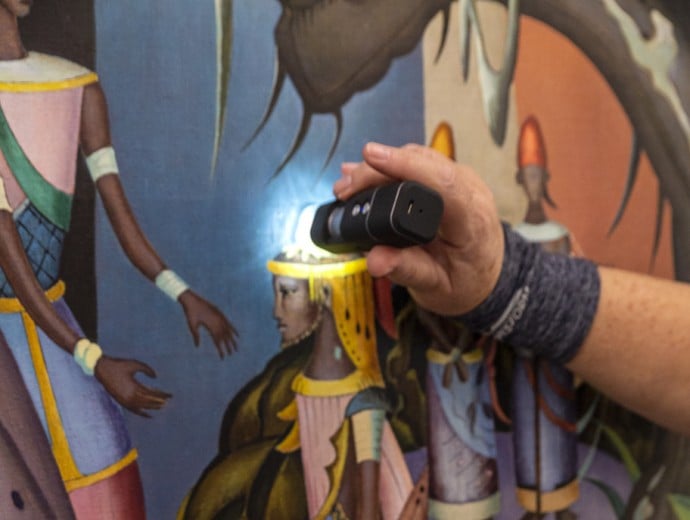 Art conservation examination of "The Discovery" prior to its relocation