UP Museums flashback to Black October 1918

The landmark of the Old Arts Building on the Hatfield Campus is home to the University of Pretoria (UP) Museums and is an integral part of the university community landscape. Enjoyed by students, staff and all visitors, this historical building houses both old and contemporary collections. The Old Arts Building also houses the UP Archives, the Mapungubwe Archives and the new UP Museums Archive.

This imposing sandstone architectural wonder with its iconic wooden clock tower, black slate roof and courtyard has seen, experienced and witnessed many graduation ceremonies and celebrated many comings and goings over more than a hundred years since the establishment of the university. Even during the fees-must-fall campaign, this archaic structure on the UP landscape has stood the test of time. It has shared protests, power struggles, student marches, and has even weathered many natural disasters such as a severe earth tremor as witnessed a few years ago, when ceramics rattled on exhibition shelves. The Old Arts Building and its feature clock tower is an infamous point of attracting the immense Gauteng highveld storms and lightning strikes.

This 2020 flashback is an ode to October of 1918, locally known as “Black October”. October was when the widespread epidemic of the Spanish Flu outbreak reached its zenith, as a result of poor sanitary conditions and of serious infections across the campus. The Spanish flu hit the University of Pretoria (at the time known as the Transvaal University College) in September of 1918, affecting both staff and students. By 23 October 1918, the UP Council declared an emergency and postponed the academic year. According to archivist, Dr Bronwyn Strydom, this was a time when, "there were only 325 students enrolled and by 1919 the number had dropped to 300." 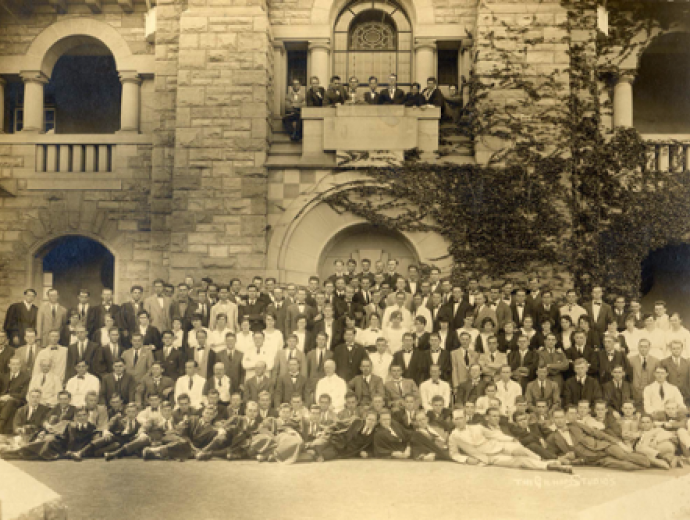 UP Students in front of the Old Arts Building 1918