International World Rhino Day: The one and only gold rhino in the world @ the University of Pretoria

World Rhino Day has become a global phenomenon since its inception by WWF-SA ten years ago in 2010 and has become an international success. International Rhino Day is an opportunity to highlight rhino poaching, debunk the myths and diminish the demand for rhino horn. For more information: https://www.worldrhinoday.org/media/.

This day celebrates both the African and Asian rhino species. The five species of rhino are black, white, greater one-horned, the Sumatra and Javan rhinos – today the University of Pretoria Museums add a sixth species: the Mapungubwe gold rhino. This gold rhino is the only artwork of its kind in the world, one of the oldest and most renowned from the Mapungubwe Collection dating to CE 1250- CE 1290. This rhino is perhaps one of the most iconic archaeological items in South Africa and is a declared and favourite national treasure.

In addition to promoting the efforts of saving all rhino species on earth, the University of Pretoria would like to employ this opportunity to share more about the Mapungubwe rhino and saving South African cultural heritage. According to Dr Sian Tiley-Nel, Head of the UP Museums and Curator of the Mapungubwe Collection, “Archaeological gold is a rarity and following the theft of the Thulamela gold collection a few years ago, the Mapungubwe Gold Collection has become rarer”. Every effort needs to be made to conserve, care for and safeguard South African heritage. The Mapungubwe gold rhino can be viewed as a South African symbol for raising awareness about the plight of anti-rhino poaching campaigns and the war against our rhinos.

The Mapungubwe gold rhino is in fact not solid gold, but it is a hollow gold foil figurine of a rhino. The gold rhino was recovered from Mapungubwe Hill from a burial site known as the “original gold grave” or M1 A620. It dates to the later occupation period of Mapungubwe from about CE 1250 – CE 1290.  It weighs only 37.4g and is rather diminutive in size 145.26mm x 55.06mm.

In detailing the indigenous craftsmanship of the Mapungubwe gold rhino figurine, one can appreciate the beauty, finesse and metallurgical skill of its production. Dr Tiley-Nel describes the Mapungubwe gold rhino in fine detail. The rhino is made of several pieces of thin gold foil, and was originally nailed onto a wooden carving. The shape was achieved by pressing gold foil over a wooden carved rhino figurine and then, holding it in place with tiny gold nails. The wooden core has since decayed over hundreds of years. The hollow, inner surface has a matt texture, which suggests that the gold was hammered out on a stone anvil, but is pale in comparison to the shiny exterior burnished gold surface. The body is made from a single folded sheet of gold that has been shaped by creasing and slight hammering or repoussé.

The head with a square muzzle is made of separate gold foil, as is the short horn, which is conically folded and shows a multitude of nail perforations. The shoulders with a prominent hump and stumpy short legs are clearly defined, as is the torso and sloping rump. The torso is centrally bulged to indicate a round belly and the broad feet are flared outward. The tail on the lower rump is positioned upright and hammered from a solid gold nugget. The tail is also decorated with incisions by a sharp tool to indicate a tuft on the tip. Two small, fluted ears are made from slightly thicker foil and were shaped separately. They are tacked to the head with two gold nails, while the eyes are formed by two solid capped gold nails. The gold rhino has a missing section on its side. Observed naturally it depicts neither a white or black rhino and is essential, a gold rhino made to be unique and one of its kind in the world 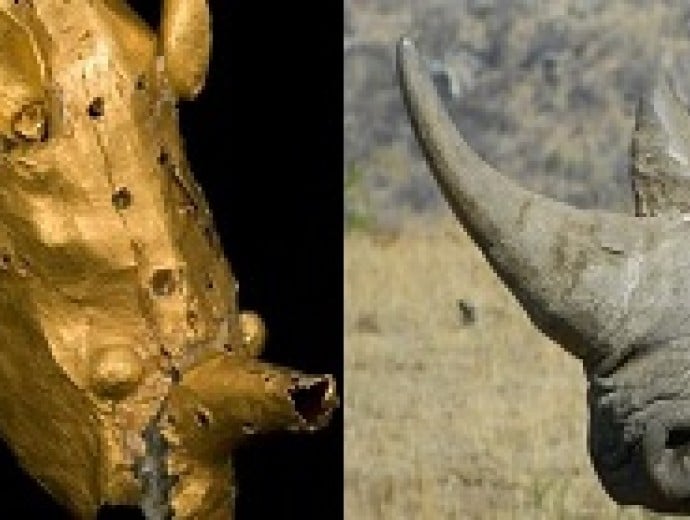