All over the world, Cherish an Antique Day is Celebrated in 09 April.  The UP Museums have a small, yet impressive collection of historical furniture, and one of the key items in the collection is perhaps one of the oldest items of museum furniture in South Africa. To celebrate the world-wide “Cherish an Antique Day” we feature both of these beautiful historical chests, truly considered unique and exceptional and over 350 years old.

This 16th Century Flemish Merchants Chest is possibly one of the oldest items of historical furniture in South Africa and is exceptionally rare. Dated to circa 1500 originating from Belgium, the chest is made of oak and features medieval carved panels with gothic tracery, trailing vine and floral motifs. Unfortunately, there is very little known information on this chest, its provenance or more detail on its origins. A traditional colonial merchant’s chest or boxes were used to store money, record books and receipt books, personal documents and letters. Merchant chests were made of hardwood and generally iron bound made for a wealthy merchant to transport valuables along trade routes. Carried on wagons or boats, such chests needed to be strong and durable to face the rigours of arduous journeys that the merchant would undertake and often the clasps and straps were made of iron and some had carrying handles to each end.

The 17th Century German Armada Chest dates to circa 1650. This forged iron strongbox of considerable weight was made in Nuremburg in Germany during the middle of the 17th century and was often known as Nuremburg Chests. The strongbox has a false lock in the front, two padlocks and a hidden latch on the lid that unlocks an eight lever lock and is painted black, with tulip and rose decoration. The hinged rectangular lid features an intricate but hidden lock to the reverse with eight bolts, enclosing the actual lid. The key for the lock is hidden in a sliding panel on the lid and the front facing key hole which is evident is in fact a false lock These chests have interesting and an intricate single key lock mechanism with often a large complicated lock on the underneath side of the lid.  Many of these chests no longer had the original key as they were destroyed precisely because of the locking mechanism. If the contents were valuable enough many of the mechanisms show damage, having been pried or smashed apart. This chest was acquired as part of the Van Tilburg Art Collection in a donation to the University of Pretoria in 1976. The iron-bound strong box was for storing valuables in the 16th and 17th centuries and may have been bolted to the captain’s cabin. The assets stored were often said to finance the campaigns of the Spanish Armada in 1588 and the name continued to become a fanciful Victorian invention recalling chests imagined to be used by the Spanish Armada. 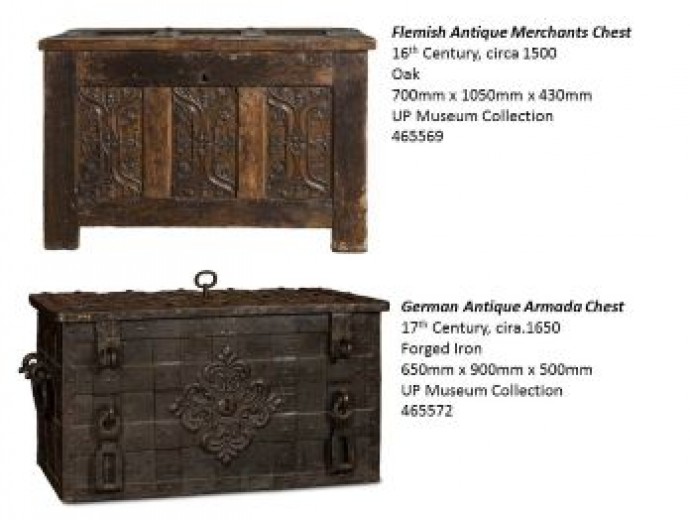 Antique Furniture at the UP Museums