Twenty-seven years ago the Old Merensky Library was declared as a national monument!

As part of the former legislation, the National Monuments Act Number 28 of 1969, the then Department of National Education declared the building located on the Hatfield Campus as a national monument.  In the meantime, the old legislation has been replaced by the National Heritage Resources Act 25 of 1999.  This act declared that all former national monuments would automatically be granted provincial heritage status.  Therefore, the Old Merensky Library remains an important heritage site on campus.

In 1933 the University of Pretoria decided to construct a separate building for the library, which was then still located in the Old Arts Building. With a contribution of £5000 from mining geologist Dr Hans Merensky, it was constructed on 11 October 1937. General Jan Smuts laid the foundation stone on 11 October 1937 and on 15 April 1939 the building was officially opened.

In designing the building, architect Gerhard Moerdyk was influenced by various styles, including Art Deco, Neo-Classicism, Arts and Crafts, as well as local styles such as Cape Dutch and Regency. Moerdyk himself described the building as a study in Persian style, with influences from Africa, including Zimbabwe and Ancient Egyptian ruins. He used local materials and incorporated symbols of African origins. The prominent zigzag pattern, for example, is taken from Great Zimbabwe and represents water and fertility. The curving of the walls symbolises an open book. The green, bevelled glass windows were imported from Italy and helped to minimise heat from the sun and also protected paper from ultraviolet light. The design of the building is a source of controversy and speculation with some claiming that Moerdyk used it as a practice run for the design of the Voortrekker Monument, as there are many similiarities between the two buildings. Today, the Old Merensky Library houses the Sculptural Collections of the University of Pretoria Museums, as well as the Mimi Coertse and other library collections. 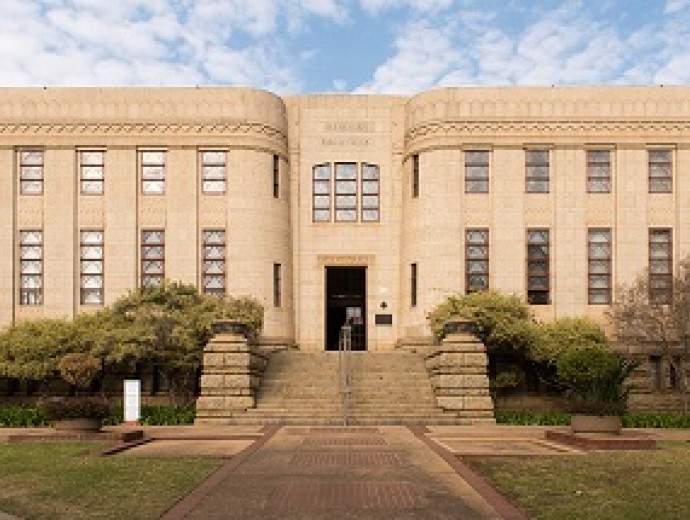