It is not every day that the UP Museums receive a notable international dignitary such as the Deputy Assistant Secretary of State for African Affairs from the US State Department. Following her visit to Zimbabwe and South Africa, having met several government authorities and other representatives, Carol Thompson O' Connell the Deputy Assistant Secretary of State for African Affairs mainly deals with health aspects, public diplomacy, public affairs efforts, and related educational issues. She is currently the first officer appointed by the Trump administration to deal with African Affairs. This was her first visit to Africa since her new appointment, and she specifically chose to visit UP, which included a special viewing of the Mapungubwe gold rhino in the Museums. According to Denver Hendricks, Manager of Government Relations and Special Projects she is also interested in "how Africa's coming youth bulge will affect stability and the economy, how that is playing out on campus, and how the university is addressing that to build the next generation of democratic leaders".

Accompanied by Denver Hendricks, during a formal visit to the Old Arts Building on Friday 9 June 2017, Carol O'Connell together with representatives from the US Embassy, Prof Theo van Wyk, Head of the Department of UP Arts, Sian Tiley-Nel, Chief Curator of the Mapungubwe collection, Bernard Hanekom, City of Tshwane, Regional Director of Special Projects and Lucas Luckhoff, CEO, Hatfield Community Improvement District visited the UP Museums with a special focus on the Mapungubwe gold rhino. Remarking, "...if the gold rhino had a name?" O' Connell felt privileged to see one of South Africa's greatest archaeological treasures and remarked on its educational importance being on public display on a university campus and highlighted the importance of the preservation of South African cultural heritage. Mrs O' Connell was clearly impressed with having the brief opportunity to view the priceless collection on her formal visit to the University of Pretoria.

The Department of UP Arts in particular has had good relationships with the US Embassy in Pretoria, who in 2014 and 2015 assisted with a research grant from the US Ambassadors Fund for Cultural Preservation of the museum bone tool and ivory collection. Future possible support for a proposed Mapungubwe Archive Preservation Project curated by Sian Tiley-Nel, Manager of the Museums and Chief Curator of the Mapungubwe Collection is also currently underway between the UP Museums and the US Embassy, and the DAS visit further supported this valuable partnership with the University of Pretoria. 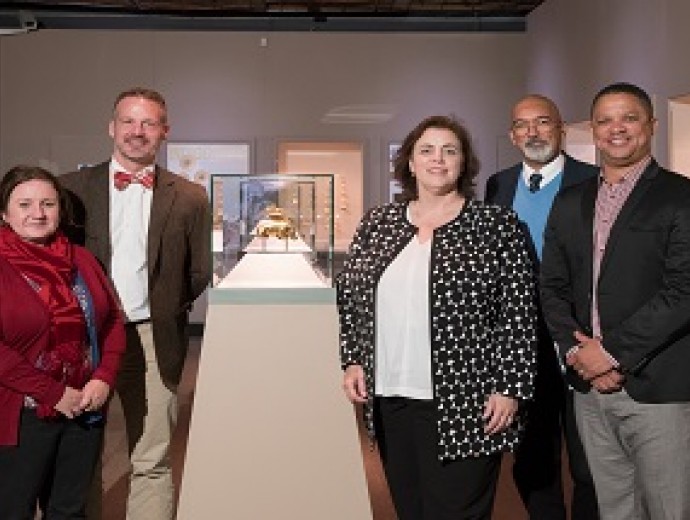