The Department of UP Arts recently welcomed Mr Ma Weidu, a renowned art collector from China. Mr Ma visited the University of Pretoria Museums on 5 June 2017 on his brief tour to South Africa, whilst he was on an awareness campaign for anti-rhino poaching.  He was particularly interested in viewing the University's Chinese ceramics as well as the Mapungubwe gold rhino. Mr Ma was very impressed with UP's immaculate campus, beautiful surroundings, as well as the remarkable museum collections on public display. According to Prof. Theo van Wyk, Head of the Department of UP Arts, 'it is always a privilege for us to host renowned and interesting visitors with such expertise as Mr Ma’s, who has demonstrated that the interest in antiquity is beyond monetary value and should rather be based on the wider appreciation of priceless art and in this respect, of Chinese culture.’

Mr Ma is the founder of the Guanfu Museum of Classic Arts in Beijing, the first privately-owned museum in China that was official approved as a registered corporate body. As an art lover, Mr Ma has accumulated an expansive collection over twenty years, with a penchant for porcelains from the Ming Dynasty (AD 1338-1644) and Qing Dynasty (AD 1644-1911), and also has a remarkable collection of Chinese gold, other metal objects and furniture. The Guanfu Museum was opened in 1996 as the first private museum, which he curated by filling it with antiques bought in the late 1970s and 1980s. The museum has expanded to several branches across China: Hangzhou in 2002, Xiamen in 2005 and three more museums on the way in Shanghai, Harbin and Shenzhen.  Ever keen to attract as many visitors as possible, Mr Ma, a serious cat lover, recently named 20 felines as assistant curators, enticing visitors to view both the cats alongside learning something about Chinese porcelains.

Mr Ma views museums "…as a social facility with an educational purpose', and although the Guanfu Museum reflects a personal interest in antiquities, the role of both private and public museums play an important role in promoting knowledge, enlightenment and inspiration in the minds of the museum-goers". Today the Guanfu Museum plays both an academic role and on a social level discussing the many opportunities and challenges that museums face in a rapidly expanding and technologically orientated world.

Born in 1955 in Shandong Province, Mr Ma is regarded as a 'self-made man' with a great passion for art. Coming from a modest background, he was initially a journalist and later a writer and literary editor, publishing hundreds of novels and non-fiction works. He later became a film producer and apart from being a very successful businessman, he is also a renowned art collector. Mr Ma was also a guest speaker on a popular television programme titled, The Lecture Room, with exciting lectures about Chinese porcelains and other antiquities as he hopes to raise public awareness about traditional Chinese culture and the value of preserving collections in museums. 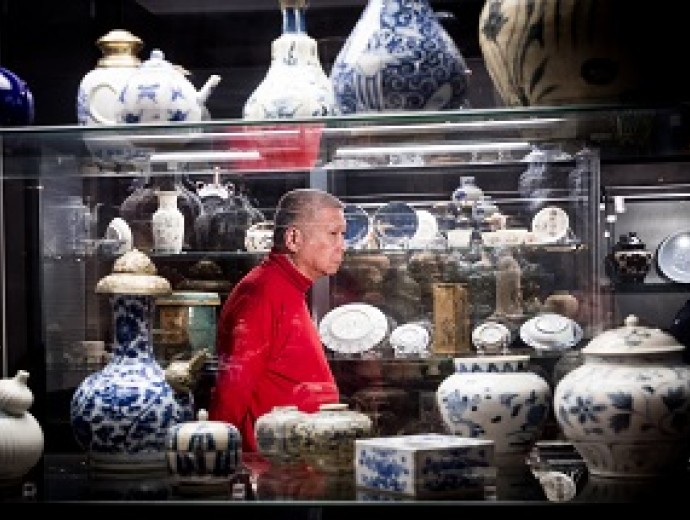 Mr Ma Weidu, renowned art collector, CEO and Curator of the Guanfu Museum of Classic Art in China viewing the Chinese ceramic collections of UP Arts