#TuksJudo: Tuks judokas are the overall USSA champions for the 5th consecutive time

Tuks judokas continued their dominance over the weekend in Port Elizabeth by winning the USSA  Tournament for a fifth consecutive time.
It certainly was not a case of "same o same o". A new generation of Tuks judokas stepped onto the mats intent to try and outsmart their rivals.
They undoubtedly succeeded in doing it to perfection. The results bear testimony to it. In the individual and open categories, the Tuks judokas managed to win ten gold medals as well as three silver medals.
Gerrit Kruger and Anashtasia Nenova respectively received the awards as the best newcomers in the male and female categories. Khanya Thamea ended up being the best male judoka. Charne Griesel who recently won a gold medal during a tournament in Tunesia was the best female judoka.
She also had the distinction of scoring the fastest ippon. It is awarded for a technique which is judged as decisive.
Griesel, who is doing the Higher Certificate in Sports Science Education, is genuinely passionate about judo as she believes it changed her life for the better.
When she was younger, it was suggested by the teachers that she should be put on Ritalin to curb her from being hyperactive. Her parents refused. They believed that participating in sport is the healthier and better way for their daughter to rid herself of excessive energy.
At first, she played hockey as well as doing judo. In no at all, she started to excel. She earned provincial colours in hockey. Those who saw her play believed that she has what it took to also play for South Africa.
Griesel, however, ended up choosing judo. To her, it is the ultimate sport. Apparently, if a day passes in which she was not able to train, she finds it challenging to be focussed on her studies or whatever she is busy doing. On occasion, she might even battle to fall asleep. It is the challenge of being the best that excites her.
"In judo, it is never only about being the strongest or fittest. It is a tactical sport which requires you to being able to think on your feet."
According to her, a good judoka is one who can pre-empt what their rival is going to do and then immediately have a plan to counter.  In sorts, it boils down a "chess game in pyjamas" on judo mats.
Griesel added that when competing internationally, she often resorts to studying up on what her rivals strongpoints and weaknesses might be. Finding out beforehand, for example, that an opponent is lefthanded can make a massive difference in the way she approaches a fight.
The Tuks judokas who won gold are Khanya Thamea (2), Christiaan Boshoff, Katlego Segoneco, Charne Griesel (2), Leanco Stans, Anashtasia Nenova (3).
Gert Kruger, Segoneco and Stans won silver medals.
- Author Wilhelm de Swardt
Share this page
Published by Leonore Jordaan 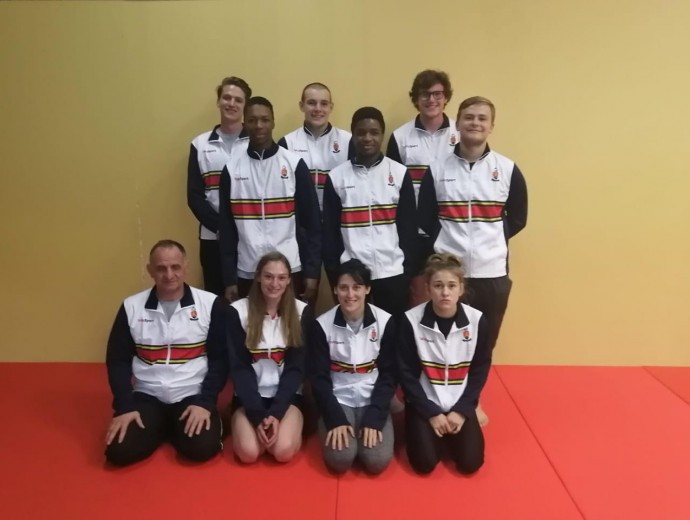