Once the initial emotion of disappointment ebbs, Michaela Whitebooi will realise that this was a silver medal won, not a gold medal lost as she became Team SA’s first medallist at the 2019 African Games on Saturday.

Sure, there was immediate disappointment for her and her coach, Nikola Filipov. After all, the Tuks HPC judo player had won the senior -48kg African Championships in Cape Town earlier this year and had obvious high hopes of doing the same on this stage.

Some time after going down in the final to home favourite Chaimae Eddinari in the -48kg category, the 23-year-old South African was still trying to overcome her emotions.
"The first thing I felt (after the defeat) was anger … at myself. I was very angry, I know I could have done better," she said "From the beginning I think I could have been more aggressive, and if I had been it could have gone different. I beat this same opponent last year, and that’s why I know I could have done it.  But congratulations to her.

"I won the African Championships in April, so this is a bit of a disappointment. I suppose though that it’s still a medal, but a different colour. I need learn from it and take the lessons into the World Championships next week. We are flying to Tokyo on the 22nd."

Any message for the remainder of Team SA at these African Games?
"I hope there are lots of golds and I hope Unelle (Snyman) brings home a better colour than what I did," she said of her judo teammate who competes on Sunday.

She had further reason to be positive after being named as TeamSA’s flag bearer for Monday’s opening ceremony.

Whitebooi certainly had impressed earlier on the mat, making short work of her first opponent, Lucky Mabaka of Botswana, securing a lightning fast ippon victory only 21 seconds into the contest.
However, the temperature was soon to be heated up. Facing her in the semi-final was the Algerian Hadjer

Mecerrem, who had won the silver medal in the 2019 African Championships in Cape Town earlier this year.
What followed was four minutes of frenzied action in which Whitebooi looked at times to be getting the upperhand, but the Algerian rallied strongly. Nothing separated them at the gong and into golden score (sudden death) it went. After 1:42 Whitebooi got the opening she wanted and took her opponent down by ippon. Into the final she went, where the home favourite Eddinari was a bridge too far on the day.

Elsewhere in judo action was Jasmine Martin, who had started off her competition in the women’s -63kg category strongly, winning by ippon against Kenyan Kimberley Ombisi with 2:34 still on the clock. However, in her 1/4 Final encounter she came up against Tunisia’s Mariem Bjaoui, who won by ippon to derail the South African’s hopes of reaching the final.

But, she still had medal hopes through the repechage and came up against 15-year-old Aina Rasaonaivo Razafy of Madagascar. She made amends for her previous setback with a slick victory by ippon.
That set her up for a shot at a bronze medal. However, it ended in controversy with the judges awarding Morocco’s Sofia Belattar a controversial win by ippon, with the judges spending a few minutes debating their decision, before upholding it, much to the delight of the home crowd.

Siya Mabulu knew he was in for a busy day given the number of entries in the men’s -66kg division but he was up for the task. The 31-year-old secured an important opening ippon victory right on the final gong against Saley Djibrilla of Nigeria in his elimination round.

He followed that up with a hard-fought win 1:37 into golden score, prevailing over Botswana’s Gwafila Tema. Next up though was Algerian Wail Ezzine who got the better of the South African by ippon with 2:38 remaining.
Still, there was a chance of progressing should he win his repechage, but the South African was unable to withstand the challenge of Steven Mungandu and went home empty-handed.
Devan Stemmet had received a bye in the elimination round of the -73kg division and then lost narrowly 1-0 to Senegal’s Gorgui Sarr in their 1/8 Final match.

Unelle Snyman also won a Silver in her category on Sunday, 18 August. 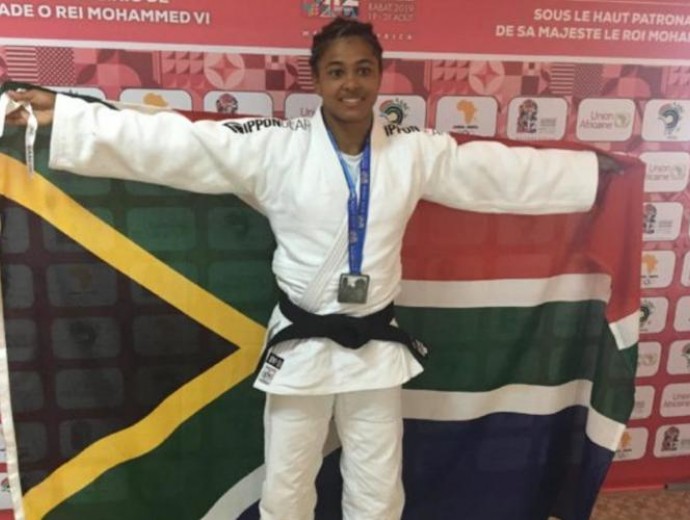