TuksJudo's head coach, Nikola Filipov, is undoubtedly doing something right seeing as to what happened during the National Federation's Awards-function (JSA) and the South African Open Championships.
Ten Tuks judokas received JSA nominations. Six ended up being recipients. During the Open Championships Tuks won 18 gold medals, eight silver and four bronze.
The African under-48kg champion, Michaela Whitebooi, is the Federation's Sportswoman of the year. Devan Stemmet, who has dominated fights in his weight category locally is the Sportsman.
Thomas Breytenbach and Katja Lang received the top accolades in the cadet categories (under-18). Anastasia Nenova is the most promising judoka. Janko Strydom received the award as the technical official of the year.
Filipov can't help but to get excited about the younger generation of judokas at Tuks and rightfully so.
Earlier this year after Breytenbach had won a silver medal at the European Cadet Judo Tournament in the Czech Republic. Following his performance, there was a brief period in which he was ranked number one in the world in his weight category. He is the first South African to do so. At the African Cadet Championships, he won a bronze medal.
Lang is a prolific medal winner when fighting internationally. Last year she competed in 12 tournaments as a Cadet. She won ten medals, of which five were gold. It led to her being ranked as high as fourth internationally in her weight category.
Recently when competing for the first time as a junior (under-20), she won a silver medal at the African Championships.
She admits to being at her best when she competes internationally.
"Because I don't know what to expect, I am more focused when fighting against international judokas. I get to execute the right moves at the right time."
The Tuks judokas who won gold during the recent South African Championships in Vanderbijlpark are Koketso Rammutla (2), Thomas Breytenbach, JP van Staden, Francois Strydom, Khanya Thamae, Roderick Kuku, DJ Le Grange, Devan Stemmet, Catalina de Oliveira, Zanya Lang, Donné Breytenbach, Charné Griesel (2), Katja Lang, Michaela Whitebooi, Anastasia Nenova and Unelle Snyman.
The silver medallists are Marciano de Oliveira, Katlego Segoneco, Gerrit Kruger, Thomas Breytenbach, JP van Staden, Andreij Horn, Liané Schabort and Katja Lang.
The bronze medallists are Khanya Thamae, Claude Nieuwoudt, Jean Oberholster and Anastasia Nenova.
- Author Wilhelm de Swardt
Share this page
Published by Leonore Jordaan 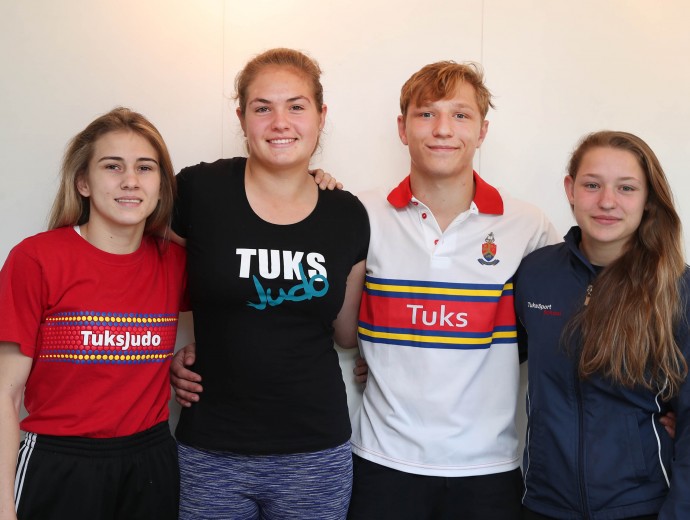