Kids aged eight and younger are not active enough, and that is why obesity in South Africa is on the increase.

This worried two of Tuks foremost judokas, Michaela Whitebooi and Charné Griesel, to such an extent that they decided to see if in some small way they can’t help to bring about change in these disturbing facts.

As both of them believe that an active body leads to a healthy mind, they decided that they want to start coaching young kids.

“I see it as a win-win situation both for judo and from a health perspective. The number of participants in judo has been on the decline for quite a few years. When I started doing judo, there were all sorts of club and provincial tournaments we could compete in, but not anymore. It is mainly due to there being fewer judokas who are actively participating," explains Griesel.

“If we can get kids excited about judo from a young age there is a real chance that we could increase our numbers again. Over the long term, it is going to be good for the sport as there might be a bigger pool of judokas from which to select our national teams.”

Whitebooi, however, stresses that at first winning and becoming champions will be the last thing kids will have to worry about.

“It is all going to be about having fun. The kids should enjoy themselves on the mats. If they do there is a real chance that they might get addicted to an active lifestyle. If that happens, it would be great. I have been told having fun is when you learn the most. Therefore our coaching is not going to be that technical. The kids should just learn the basic moves and do some exercises that will improve their flexibility.

“The best thing about judo is that teaches you about discipline and gives you confidence. Nowadays with bullying being a real problem it is good for kids to have some means to defend themselves should the need arise,” said Whitebooi.

From a personal perspective, the Tuks judoka has no hesitation in saying that judo has changed her life for the better. Because she came from a poor background, there was a real chance that she would never get an opportunity to study. However, her judo talent was spotted, and that changed her life. Last year she completed her BCom Financial Science degree, and she is now busy with post-graduate studies.

According to both starting to coach might have extra benefits for them.

“At the moment during training we often just go about things not really thinking about we are doing. Everything happens sort of automatically. However when you coach you got to think about what you are doing and try to simplify what you are trying to teach so that the kids can understand” said Griesel 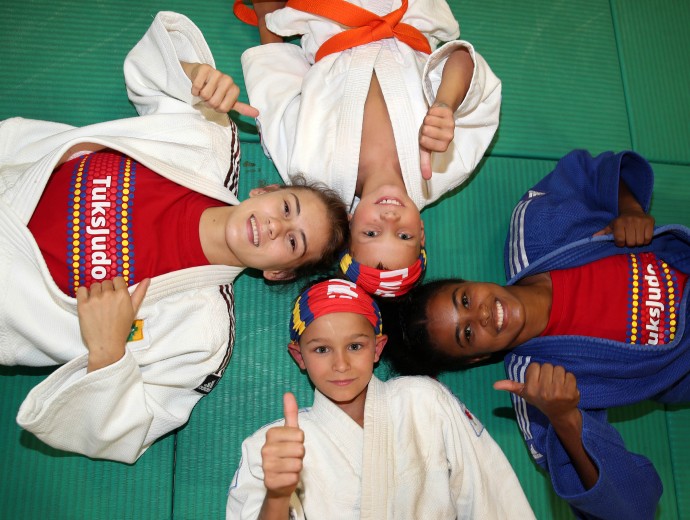