Another year, different challenges but the UP-Tuks judokas made sure the result that matters remained the same over the weekend by winning the USSA Tournament for the fourth consecutive year in Cape Town.
This time around being the national university champions are indeed more special as the Tuks team was not at full strength. Two of Tuks top female judokas, Michaela Whitebooi and Unelle Snyman, could not compete as they were representing South Africa at the World Championships in Baku, Azerbaijan.
Credit for the UP-Tuks dominance certainly must go to Nikola Filipov. The former Bulgarian Olympian has been coaching at the university for the last eleven years.
As a coach, Filipov is as hardcore as they come, not believing in second chances. He is also a firm believer in utter dedication. He has a definite opinion as to what it takes to succeed in judo.
“It is all about having a real fighting spirit. It will never be in judo just about how perfect you are able to execute a technique, or how strong and fit you are. Everybody is strong and fit. To become a champion you have to be able to push yourself to the edge of your limits day in and day out.
“Trust is also of the utmost importance. When I tell a judoka to do something he should not try and second guess me. The moment he does the trust is broken, and then failure becomes a reality.”
Any Tuks judoka will tell you that having Filipov next to the mats when fighting is a huge added benefit as he is a brilliant strategist who is able to within seconds summarise what needs to be done to ensure a victory.
During the Friday’s individual competition the UP-Tuks judokas dominated winning no less than eight gold medals and five silver medals.
The gold medallists are Jaydi Stemmet (under-66kg), Devan Stemmet (under-73kg and open under-73kg), Christiaan Boshoff (under-81kg), Jeandré Brand (under-52 and under-57kg), Bea Meiring (under-78kg and Open).
The silver medallists are: Christiaan Heystek (under-73kg), Christiaan Boshoff (Open under-81kg), Brendon Marais (under-90kg), Asher Binder (under-100kg), Leanco Stans (under-63kg).
Jaydi Stemmet received the award for the fastest ippon during the tournament by winning a fight in a mere four seconds. Bea Meiring was the second fastest winner needing only five seconds to clinch a victory.
An ippon is awarded for a technique which is judged as decisive.  It is usually a move which connects cleanly, with good form and with little opportunity for the opponent to defend against it.
- Author Wilhelm de Swardt
Share this page
Published by Leonore Jordaan 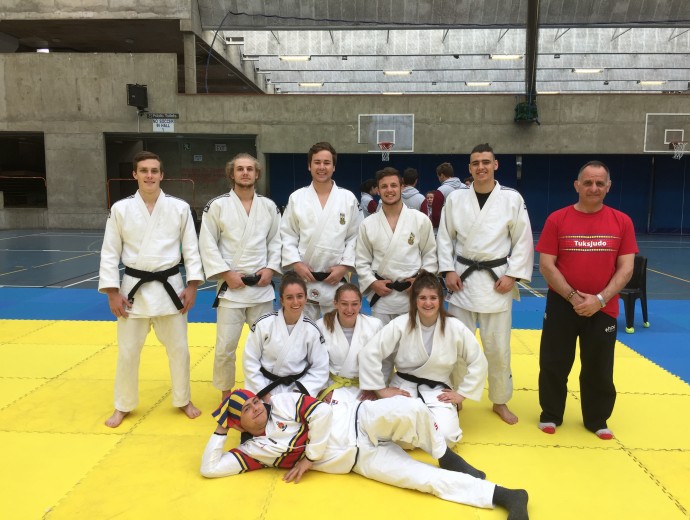