#TuksJudo: Snyman to fight one of the best at the Judo World Championships

When Unelle Snyman steps onto the mat on Saturday during the Judo World Championships in Baku, Azerbaijan she knows she is in for a tough challenge, but the Tuks judoka is confident of giving as good as she gets.
Her opponent is Mayra Aguiar (Brazil) who is arguably one of the best in the world. The Brazilian won bronze medals in the under-78kg category at 2012 as well as the 2016 Olympic Games and was the world champion in 2014 and 2017. Actually, hardly a year has gone by in which she did not medal at the world championships.
Although Snyman is impressed by her opponent’s fight record, she realises that the biggest mistake she can make is to be intimidated by statistics.
“In the past, I might have doubted whether I am good enough to compete against the best, but I came to the realisation that I have trained as hard as any of the other judokas who are fighting. Our coach Nikola Filipov is world class knowing. He knew what needed to be done to ensure that I shall be at my best for the championships. It is just a case of doing what I have been taught and be focussed.
“It is true that I might lack experience but I believe my hunger to perform at my best will make up for it. More importantly is that I will be fighting to make myself proud. No matter what happens if afterwards I know I had been the best I could I will be happy.”
Even though Michaela Whitebooi (Tuks) lost out this morning against Gabriela Chibana (Brazil), she can feel proud about her performance. Filipov said his protégé was leading on points with only a few seconds of the fight remaining. Unfortunately, Whitebooi let her guard down for the briefest of moments. That was all it took. Chibana managed to score an ippon.
According to Filipov, the Brazilian is a seasoned campaigner. She has won gold medals at two Grand Prix-meetings as well as various World Cup medals. Filipov laments that he could not be there to assist Whitebooi.
“I honestly believe had I been there I would have been able to make sure that Whitebooi remained focused right to the end.”
- Author Wilhelm de Swardt
Share this page
Published by Leonore Jordaan 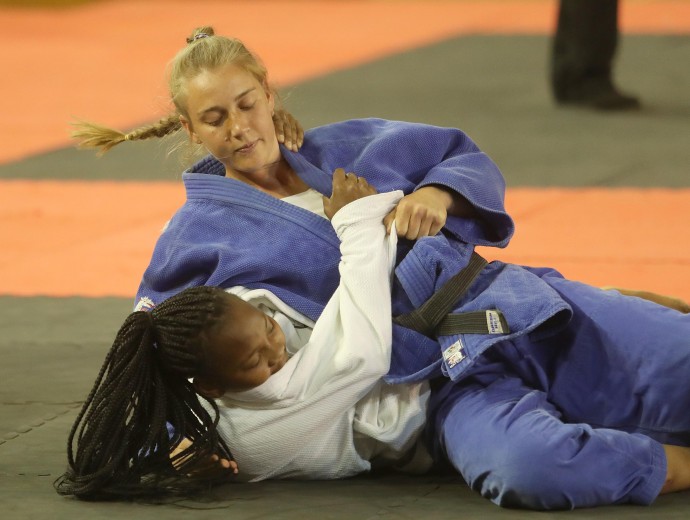