Unelle Snyman (Tuks) won a bronze medal in the women’s under-78kg category at the African Judo Championships in Tunisia.
She is of the opinion that with a little bit of luck she could have contested for the silver or gold medal.
Her second fight at the tournament was against Kaouthar Ouallal (Algeria). It was a no holds barred encounter in which both tried to outsmart the other but to no avail. After the official time for the fight ran out the scores were still level. So it boiled down to the “Golden Score” which meant an extra three minutes of fighting on the mat. Unfortunately, Snyman lost out by being penalised.
“Naturally I would have loved to win, but I gave it my all. On the day it was not good enough, but I have learned a lot that will stand me in good stead in the future. I can take a little bit of satisfaction from the fact that Ouallal went on to win the gold medal.”
The Tuks judoka won her first fight against Egypt’s Alaa Hamed with an ippon and also was victorious against Morocco’s Fatima Chakir.
Snyman also claimed a Bronze the next day in the Open category to add to her medal collection.
The Tuks judoka is starting to make a habit of it winning medals at international tournaments. At last year’s African Tournament she won a silver medal.
Snyman's judo CV is indeed impressive. As a youngster, she won gold and silver medals at the African Championships. In 2014 she represented South Africa at the Youth Olympic Games in Nanjing where she just missed out winning a bronze medal.
Judo has been part of her life from when she was five years old. Her brother, Ruan-Tobie, won a silver medal at the 2014 Commonwealth Games in Glasgow.
Another highlight for Unelle is that she's graduating with a BA Sport and Recreation Management (Sport Psychology) Degree on 25 April.
- Author Wilhelm de Swardt
Share this page
Published by Leonore Jordaan 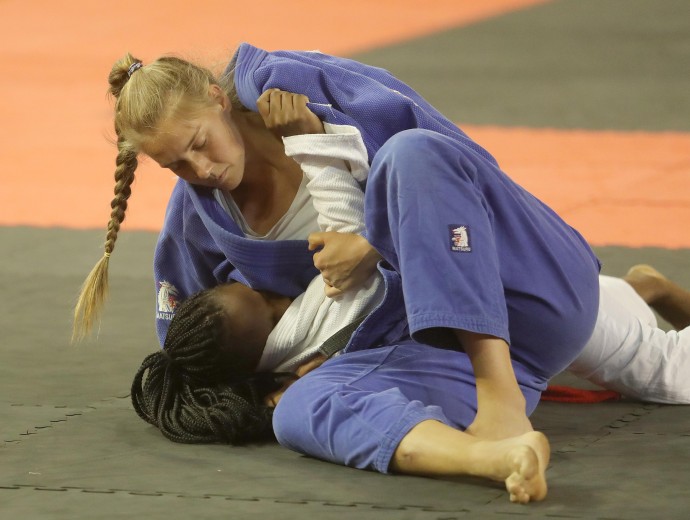