Zack Piontek (Tuks/hpc) may have achieved his goal of representing South Africa at the Olympic Games in Rio by winning a silver medal for judo at the African Championships in Tunis, Tunisia.

Before the championships, Piontek was ranked 24th in the under-90kg category. His international ranking will certainly improve after this accomplishment and the latest rankings will be released on Monday (11 April 2016). Only the top 22 judokas in each category will automatically qualify to compete in Rio. However, because a country is allowed to enter only one judoka per category, there is a good chance that a judoka with a ranking slightly lower than 22nd may qualify. The end of May will be the cut-off for the Olympic qualification.

Piontek is slightly disappointed that he was not able to win the gold medal in Tunisia. It was the second time in two years that he lost in the final of the African Championships.

'Winning the title was a major goal for 2016, but I have no excuses. I gave it my best, but the better man won. Our category actually played out exactly according to our rankings. I was ranked second and lost in the final to Abderra Benamadi from Algeria, who was ranked number one.

'The positive I can take from this experience is that it most likely gave me enough international ranking points to compete in Rio, but I will only know for certain on 31 May,' said the 2014 Commonwealth Games Champion.

The Tuks/hpc judoka won his first fight against Ghana's Victor Ahiavor by first scoring a waza-ari and then finishing with an ippon.

'Abd El Akher won the African title in 2013 and 2014. Unfortunately, he was side-lined owing to an injury and was only able to start competing again at the end of last year.

'I opened my score with a waza-ari and then managed to score a yuko, but he never gave up and kept on bringing the fight to me. In the last 30 seconds, he managed to outmanoeuvre me to also score a waza-ari.

'I have to be honest.  Beating Abd El Akher was special because the last time we fought was in 2013 and he won. It was payback time for me.

'Benamadi beat me in the final because he was able to counter most of my attacks. There was a moment when I thought I might win. I outwitted him with one of my techniques and managed to pin him but, with only seven seconds left in our fight, he wriggled loose and won on points.' 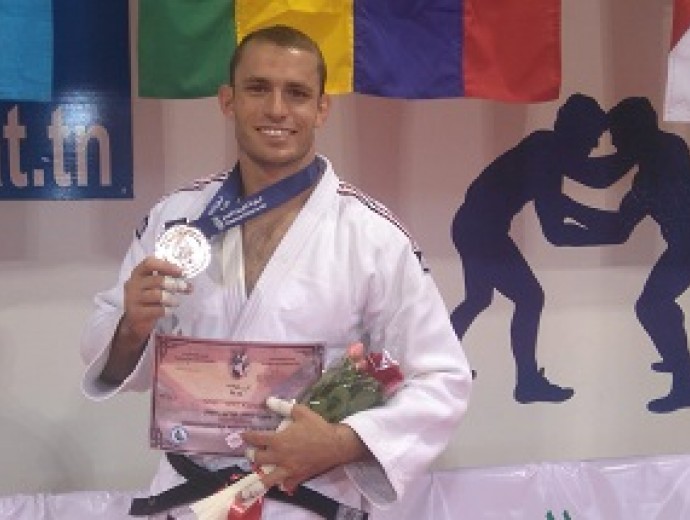 Zack Piontek with his silver medal