On 4 June 2019, the Centre for the Advancement of Scholarship hosted the inaugural seminar of its #foodtalks seminar series. The series will focus on bringing together leading thinkers and practitioners in the food sector to share knowledge and create a space to talk about the hindrances and the opportunities that pertain to the current food system, nationally, continentally and globally.

In her presentation, Dr Ledger outlined the issue of power in the national food system and how the hegemonic position of food companies and food supermarkets has negative social impact, resulting in reduced choices for consumers, childhood malnutrition, the unsustainability of small-scale farms and lack of access to food by the most vulnerable in society. She highlighted how the problems that arose due to the imbalance of power in the system were being addressed in isolation and not systematically. She argued that, the problem of childhood deaths in relation to starvation, for example, tends to be addressed mainly as a healthcare problem and seldom a problem of the broader system. Dr Ledger also highlighted a number of ineffective interventions aimed at the individual, such as information campaigns that assume consumer ignorance, rather than the communal and systemic level.

She stressed the need for government intervention in breaking the inordinate amount of power wielded by food companies and supermarkets. Their power undermines the constitutional right to food, she argued, as too many people simply cannot afford to buy food for a nutritious diet.

For her part, Dr Lindiwe Sibanda pitched her intervention at the level of hunger eradication in light of the Sustainable Development Goals (SDGs). Focussing on poor dietary habits in Africa, she highlighted some of the factors that contributed to such dietary practices as the low intake of fruits and vegetables. She traced changes in diet to different food systems, using the example of her grandmothers diverse production system - which in the past provided the family with a full and balanced diet - to illustrate the “Rainbow revolution”. This was then displaced by the “Green revolution” that increased production and commercialisation of a narrow range of grains, but with a negative impact on dietary diversity. Now we are seeing the “Fast food revolution” that is accompanying rapid urbanisation as well as changes in the way people access and consume food.

Dr Sibanda stressed the need for a multi-sectoral and food system approach to improve dietary practices and related challenges such as the cost of food and the adverse effects of climate change on food production.

This event was organised in collaboration with the DST-NRF Centre of Excellence in Food Security, the Centre for the Study of Governance Innovation (GovInn), and the Human Economy Programme within CAS.

The next #foodtalks will be on 7th August at the Centre for the Advancement of Scholarship and will focus on land reforms and the link with the right to food in South Africa. 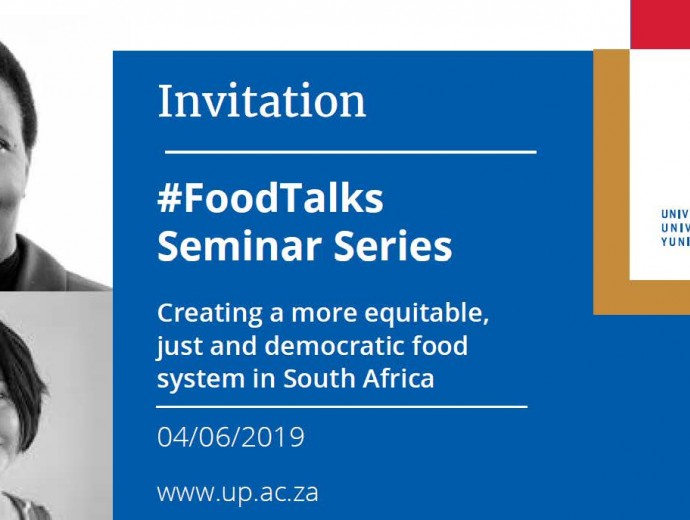