On day seven at the Birmingham2022 Commonwealth Games, Jovan van Vuuren of TuksAthletics, did something in Birmingham that few other South African men’s long jumpers have been unable to achieve: that is medalling at the Games.

Van Vuuren jumped 8.06 metres with his second attempt. For a few minutes, he was a gold medal contender. But then Nairn jumped 8.08 metres with his very next jump. Sreeshankar did so with his fifth attempt. The Tuks Masters student is not allowing himself to be disappointed.

"It is the beauty of long jumping. You could be in the lead, but it means nothing until the last jump. You could lose the gold or any medal in the dying seconds. It makes my sport so exciting and is why I am passionate about what I do.

"My hamstring started to act up midway through the competition, but there was no way that I was not going to go down without a fight. With my last attempts, it was a case of grin and bore it.

It is only the third time since 1994 that a South African long jumper has medalled at the Commonwealth Games. In 2014 in Glasgow, Zarck Visser won silver and  Rushwahl Samaai bronze. Four years later, at the Gold Coast Games, Luvo Manyonga was victorious, with Samaai again finishing third.

Van Vuuren describes his season as a "roller coaster".

"'I did some excellent jumps. Being able to consistently jump further than eight metres has done wonders for my confidence."'

The Tuks athlete has done so every time he competed locally. A definite highlight was his 8.16-metre effort during the Gauteng North Champs. It ranks him seventh on South Africa's all-time list for best performances. Internationally his 8.16 metres ranks as one of the 15th best distances for the season. Van Vuuren went on to win the South African title as well.

Van Vuuren credits his World Championships debut in Oregon, the USA, as the eye-opener he needed.

"If I have to be honest, it was a sort of bomb shock experience. First, I had to fight off the jetlag. Then I had to come to peace, walking shoulder to shoulder with some of the international athletics legends. In the end, everything boiled down for me to compete more on mental strength than physical strength. I might not have qualified for the final, but the experience I gained stood me in good stead in Birmingham.

"It will be wrong for me not to thank my coach, Neil Cornelius, for his effort to be at the Games. I think it cost him more than R20 000 to do so. But he is not complaining; he wanted to be next to the track to ensure I stick to the basics. Thanks, "Coach" I genuinely value your guidance." 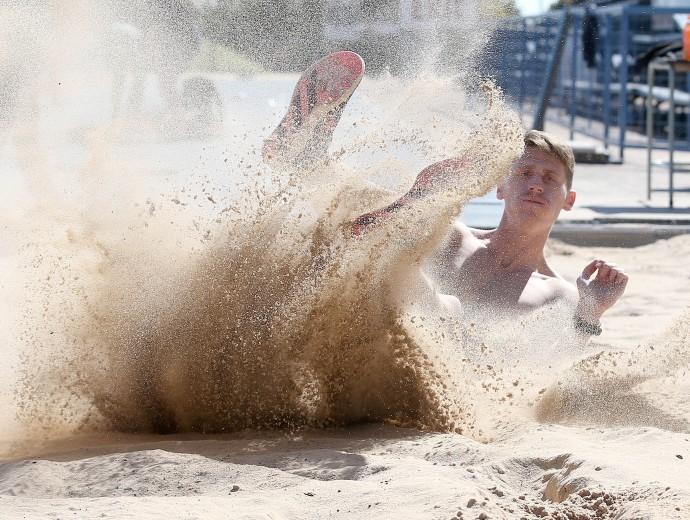