#TuksAthletics: Kyle Blignaut and Jason van Rooyen on a mission to revive shotput in South Africa

The men's shot put has become one of the forgotten events in South African athletics, but Jason van Rooyen and Kyle Blignaut's rivalry could change this.

It has never happened that two South African shot-putters have gone past the 21-metre marker in the same year. Before their heroics, Janus Roberts (21.97 metres) and Orazio Cremona (21.51m) were the only two local athletes who had thrown further than 21 metres. Roberts last did so in 2006 and Cremona in 2019.

Van Rooyen and Blignaut are currently third and fourth on South Africa's shot-putters all-time list. What makes it exciting is that they are respectively only 24 and 21. Shot-putters tend to peak from 25 onwards.

Blignaut of Tuks, believes if nothing unforeseen happens in the next three years, there is a real chance of a South African medal in the men's shot put at the Olympic Games or a World Championships.

Beginning of the month, he set his sights on qualifying for the Tokyo Olympics. It sounded bold.

The "Big Man" of TuksAthletics considered it a doable challenge. On 15 May, he threw a distance of 21.21m setting a new USSA record and won a gold medal at the 2021 USSA Athletics Championships in Johannesburg.

For the record, Blignaut is 1.95 metres tall and weighs 148kg. He played rugby for a while at school, but he realised that the tape measure is fairer when judging performances. That is why he chose to stick with athletics.

In 2018, he won gold at the World Junior Championships in Finland. This season at the South African Senior National Championships, he won his first gold medal. His winning distance was 20.82 metres. Van Rooyen was second with a 20.60m effort.

"When we compete, there is never any mercy. I don't like losing, neither does he, but there are never any bad feelings after a competition. I was glad for Jason when he broke through the 21metre-marker, and he congratulated me when I did so.

"I must admit that I am a very competitive person. It has to do with the way I grew up. As a family, we always had some sort of competition going. I never competed to be second.

"It has stood me in good stead. Even when I train, there are no half measures. During every training session, I warm up as if I am going to compete. When I throw, it is always an 80% plus effort. I think it is essential to do so. You got to condition your body to be ready for when you are competing, and you need to step up."

According to Blignaut his coach, Pierre Blignaut, is the one who deserves all the credit for what he has achieved.

"Although Pierre and I are not related, it feels like his family. He is the one who made me believe nothing is impossible and taught me that shotput is 65% good technique and 35% brute strength. Jaco Engelbrecht, a former shotputter, also inspired me a lot." 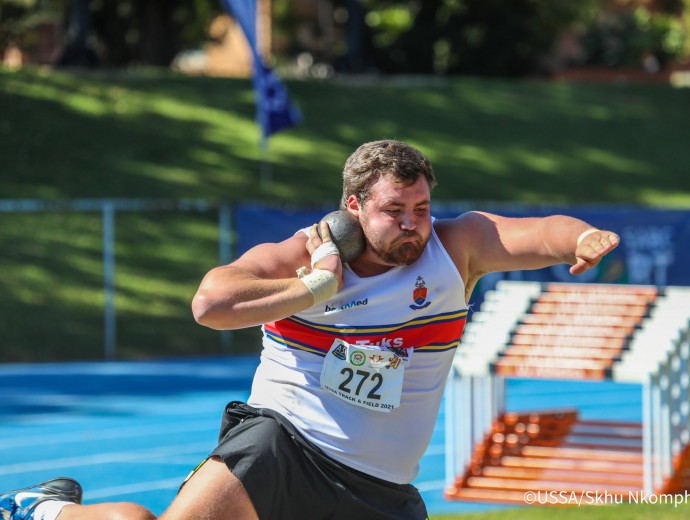