#TuksAthletics: There is a lot at stake for Simbine in Rome

Tomorrow night when Akani Simbine lines up to race the 100 metres in Rome; it could be history in the making for the Adidas-Tuks athlete.

Simbine has undoubtedly been impressive. So far this season he has not been beaten over 100 metres. Last night during the Gala dei Castelli Meeting in Switzerland he won the short sprint in a time of 10.02s. It was his third consecutive victory in a final of an international meeting. The last time he did so was in 2015.

Should he win in Rome, it will take his winning tally to four which will be a new personal benchmark. There is, however, more at stake. If he wins, he will achieve something many athletes dream off. That is being unbeaten for a whole season. Tomorrow's race is in all probability his last for 2020.

The Adidas-Tuks athlete's winning streak started in March during the Gauteng North Championships when he won his heat in a time of 9.91s. He has since gone on to win another six 100 metre races. It includes running heats.

Simbine longest unbeaten streak in the 100 metres was in 2015 when he won 10 races on the trot, but that was all in local events.

Judging by the statistics, Simbine has a real chance of winning in Rome. Of the nine athletes racing, he is the only one to have dipped under ten seconds this season. Even last night's winning time of 10.02s in Switzerland would make Simbine the fastest.

The Adidas-Tuks athlete is, however, the first to realise that statistics count for nothing. When he settles in his starting blocks, there are no favourites. 100-metre racing is unforgiving. In those 10 seconds of racing, there is never any margin for error. Simbine would have it no other way.

He is on record saying: "What I love about sprinting is pushing my body to the maximum and knowing at that point, I cannot afford to make a single mistake."

Simbine has another incentive to wanting to win. If he does, it will mean that he can boast with a hat-trick of victories in Diamond League meetings. He won the 100 metres in 2017 in Doha and 2019 in London.

It exciting to note that Simbine has gotten consistently faster each time he raced in Europe. In France, his winning time was 10.19s. Then he clocked 10.17s in Italy followed by 10.02s in Switzerland.

Italy's Filippo Tortu was second last night in a time of 10.07s. Arthur Cisse (Côte d'Ivoire) is possible the one athlete that can beat Simbine. His best time is 9.93s.

One of the old men of international sprinting, Michael Rodgers (USA) can never be written off. The former World Championships medallist has got a personal best time of 9.85s to his name. 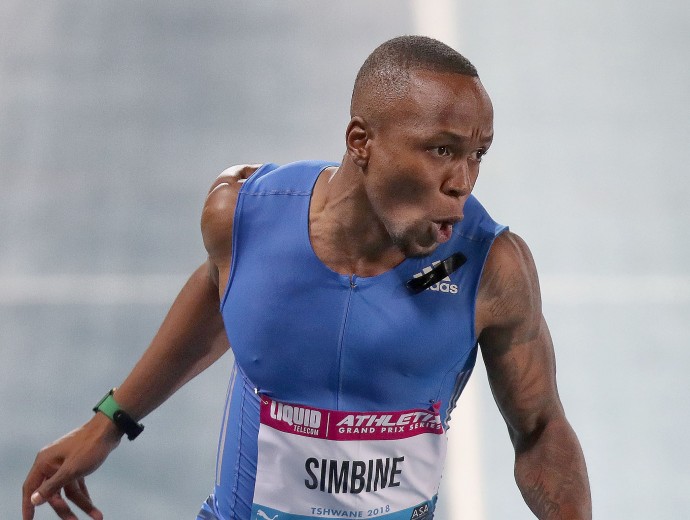