#TuksAthletics: Simbine aims to be fast each time he races

The coronavirus outbreak is having a severe impact on the international sports scene.

Still, for now, it is business as usual for Akani Simbine (Adidas-Tuks). He is only focussed on being fast. Yesterday morning during the Gauteng North Championships at Tuks he won his 100-metre heat in a time of 9.91s. It means his participation at the Tokyo Olympic Games is a done deal.

That is, however, if the Games should go ahead. In light of so many international sports events already being temporarily suspended, there seem to be no guarantees at the moment. As most Simbine is worried about the coronavirus outbreak, but at the same time, he is a realist.

"As an athlete, I can only focus on controlling the controllable. That is giving 100% during training and racing. The aim is to be the best I can if the Olympic Games should go ahead. You can't be in a situation, thinking it is not going to happen and stop training."

The Adidas-Tuks athlete was certainly impressive yesterday. It was the first time he raced this season. His time of 9.91s is a mere 0.02s slower than his South African record of 9.89s. It was also the 25th time he dipped under ten seconds.

He won the final running 10.01s. During the semifinals, his time was 10.03s which means he has dipped under the 10.05s Olympic qualification standard each time he raced.

Simbine explained that while settling into his starting blocks, he only had one mindset. It was to push himself to the utmost each time he raced without getting injured.

"I wanted to be fast. It was exciting to open my season running 9.91s. I know I am capable of being even faster. My technical execution was far from perfect.

"It was not intended to be disrespectful to anyone. I did so in the heat of the moment. I had a bad start to my race, was able to make a comeback and win. That excited me."

The Adidas-Tuks athlete aims to compete in all three the Grand Prix-events. In Cape Town, he will be racing the 200 metres and in Pretoria and Potchefstroom the 100 metres.

"It is a conscious decision to race more in South Africa this season. The aim is to get mentally as tough as I can be so that when I get to run in Europe, I am up to any challenge."

Bruintjies was equally impressive yesterday. The Puma-Tuks athlete clocked a time of 10.08s in the semifinals as well as the final. According to him, he decided after last year's dismal season that he needed to get his act together.

"I can't remember when last I was so competitive in a 100m race. Still, it is not the best I can be. There are a lot of things I can work on to be even faster."

Clarence Munyai (Puma-Tuks) qualified on Friday in the 200m for the Tokyo Games running 20.23s in the semifinal. 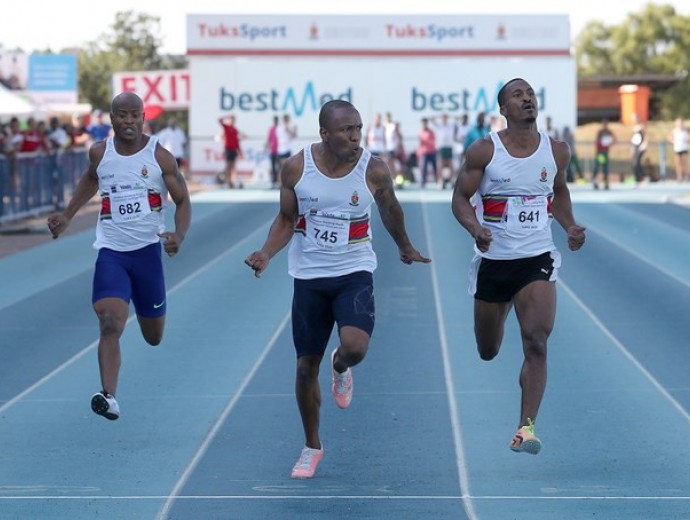