#TuksAthletics: At 88 years Larkin is not slowing down at all

When you are 88 years old, it might seem a good idea to slow down a bit in life, but not if you are Deidre Larkin, she is still challenging the stopwatch every weekend.

For her, faster will always be better. So it was no surprise that on Saturday during the Bestmed-Tuks event she was not happy with the time in which she won her 10km-race (80-plus category). She ran a time of 1 hour and 15 minutes. She was by far the eldest competitor.

"I should have been faster. Last night (Friday) in Johannesburg I ran 1 hour and 10 minutes."

Doubling up, running two races over the weekend has become the norm to Larkin. On Saturdays, she tries to race in Pretoria and on Sundays in Johannesburg. Once a month she really goes "big". Then she runs 21 kilometres, however, that the furthest she will go.

"I will die if I attempt to run a marathon," is her honest assessment of what her physical limitations are.

Larkin is a relative latecomer to road running. The first time she bought running shoes was when she was 78. It was her son that sort of convinced her to take her first steps on the road.

"I was diagnosed as having osteoporosis when in my seventies. The medicine the doctor prescribed made me feel ill. The turning point in my life was when my son came to live with me. He took up running for health reasons and seemed to be enjoying it. So I thought I would also give it a go. It did not take long before I started to love the challenges that come with running.

"My health also improved. I still got osteoporosis, but my condition has stabilised. Before I started to run, it was slowly getting worse."

Judging by Saturday's Bestmed 10km race results there seems something to be said for women improving with age. The 39-year old Catherine Skosana won the women's elite race in a time of 40:15. Myrette Brink who is also 39, was second in 40:36. Madri Verster was third 40:51.

Running seems to be part and parcel of the Skosana family. Catherine and her husband, Enoch, both got national colours as runners. They are also now actively involved in coaching.

Later on, Saturday Catherine was coaching sub-youth athletes. The goal is for them to be at their best for next month's Gauteng North Championships at Tuks. Her eldest daughter, Busisiwe, is at TuksSport High School and also a runner.

Brink earned her national colours as a 3000m-steeplechase athlete while she was studying at Tuks. Her best time of 10:03:07 ranks her as one of South Africa's four best ever. According to Brink, she stopped running when her coach, Steve Rautenbach, died.

It is only recently that she took up running again. Although her main aim is to have fun, there is still a competitive edge to her running. She aims to run her first marathon at the end of the year in time faster than 2 hours and 50 minutes.

Being the mother of two sons brings its own unique challenge. More than often, when she goes for a run, she is pushing a pram with her sons Liam and Michael fulfilling the role of coaches.

"I hope them being with me on the run is going to inspire them when they are older. I want Liam and Michal to learn from a young age the importance of having a balance in life. It is never only about work or play." 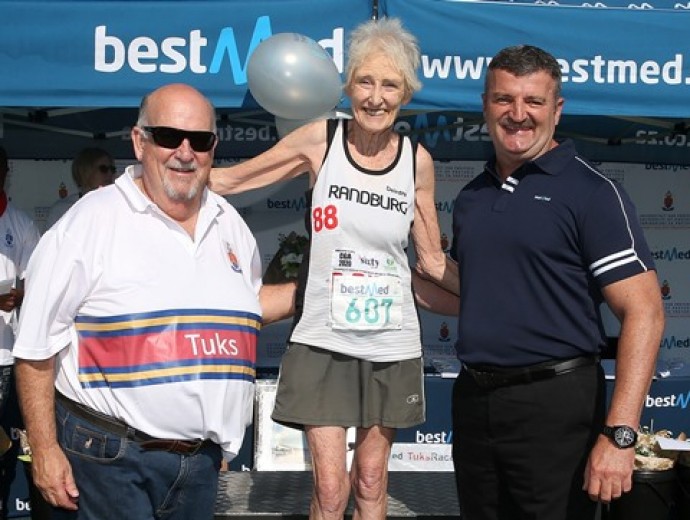