Othaniel Phahlane proved on Saturday with his victory in the Bestmed-Tuks Marathon that good things happen to those who can persevere.
Over the last decade, he has reached absolute highs as a runner, but unfortunately, he also had hit rock bottom. It is no exaggeration. Since 2014 he has continuously been injured. The worst of it was an Achilles-injury that forced him to completely stop running for the last four years. It was only towards the end of 2019 that he started to race competitively again.
According to Phahlane, it was his absolute love for running that kept him from quitting on his dreams. As far as he was concerned, he had unfinished business on the road.
Ten years ago Phahlane was considered to be one ofo the stars of South African distance running. His on-road heroics led to him often making the headlines in running articles.
A definite highlight was in 2010 when Phahlane won the Om die Dam 50km in two hours 49 minutes and 39 seconds, carving a massive five minutes from the course record. In 2012 he was shortlisted to compete at the London Olympic Games. He had run a 2:14:55 marathon in Dubai.
On Saturday during the Bestmed-Tuks marathon, he proved to be tactically astute biding his time before he made his move. Once he took the lead, there was no stopping him. He won in 2:28:30. Raoul Mabirimisa was second in 2:30:56 with Colin Kanyimo third in 2:31:17.
The win was the confidence booster Phahlane needed before next month's Two Oceans 56km-race. He is confident of being a top-three finisher.
The Bestmed-Tuks half-marathon was won by Colin Malaudzi in a time of 1:09:31. Joseph Manyedi was second in 1:09:46 and Tete Dijana third in 1:10:22.
Malaudzi was happy with the way his race played out despite winning by a mere 15 seconds.
"I was in control from the start sticking to my race plan. I purposely held back over the first ten kilometres to see what my rivals are doing. After 14 kilometres I realised I could win, so I upped my pace. It did not take long for me to take the lead. I realised at the 17km-marker that the race was mine to lose."
Milton Kekana, who won the 10 000 metres during last year's World Student Games in Italy won the Bestmed-Tuks 10km race in a time of 31:31. Mathews Leeto was second in 31:40 and Lucky Mohale third in 32:42.
The 10km-race turned out to be a humdinger. Leeto decided to race from the front. It led to him being in the lead for the first six kilometres. Unfortunately for him he then started to cramp which slowed him down. It might be because he had to get up at two in the morning in Zeerust to be in time for the race. Kekana passed the gutsy runner at the 7km-marker.
The women's marathon was won by Patience Khumalo; the women's half-marathon by Rosaline Isaiah and the 10km by Catherine Skosana.
- Author Wilhelm de Swardt
Published by Leonore Jordaan 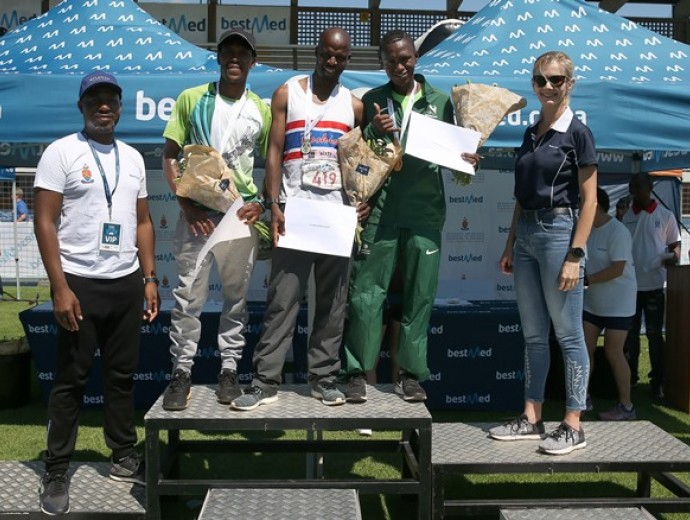