Whoever beats Thabang Hlohlo (TuksSport High School) tomorrow in the 100 metres during the Twizza Super School Series Grand Finale at Tuks can definitely claim to be one of the fastest schoolboy sprinters in South Africa.
It is, however, going to be easier said than done. The young sprinter established him last year as one of the most exciting prospects in South African athletics. He was victorious during South Africa's as well Africa Junior Championships in the under-18 100-metre races.  Locally he was not beaten once last year in the short sprint when racing in his age-group.
To top it all his best time, 10.44s ranked him as one of the eighth-fastest under-18 sprinters in the world.
Hlohlo is hesitant to make bold predictions. He believes in letting his legs do the work, and then he will start talking.
"It is early in the season, so I don't want to speculate about possible times. The only promise I can make is that every time I line up to race, my sole aim is to perform to the best of my ability."
When he was younger the TuksSport High School athlete used to excel in rugby, hockey and football as well, but there was never any doubt in which sport he wanted to excel. It was always going to be athletics. It could be said the need for speed is in his genes.
It is a family thing. Grandad was fast, so were grandmom, mother and father. According to Hlohlo, his only aim is to continue their legacy.
Naturally, the topic of who is really the fastest would crop up during family conversations. At times there is even talk of a family duel. Dad versus son. In his heyday dad, Bongani was also able to run sub 10.50s times in the 100 metres. Hlohlo is confident of outsprinting his dad.
"He is getting old. He is assuredly at 47 not as fast as he used to be so I can't see him outsprinting me."
The current 100m world champion, Christian Coleman (USA), is a role model to the Tuks-athlete and not only because of speedy exploits.
"I am relatively short for a sprinter as is Christian. He has proven to me that lack of length is not a handicap when it comes to sprinting."
When asked about what the secret is fast is he immediately mentions his coach Thabo Matebedi.
"He is the absolute best as he knows how to relate every athlete he coaches. I have realised that if I trust what he tells me to do, it is guaranteed that I will run fast times. Currently, I mostly rely on pure speed for good results, but my coach has already got plans to ensure that physically I get stronger."
Danielle Nolte is another TuksSport High School athlete to watch out for tomorrow. During last year's South Africa Junior Championships, she won a silver medal in the under-18 triple jump competition. She also ended last season with the best distance in the long jump, namely 5.80m.
- Author Wilhelm de Swardt
Published by Leonore Jordaan 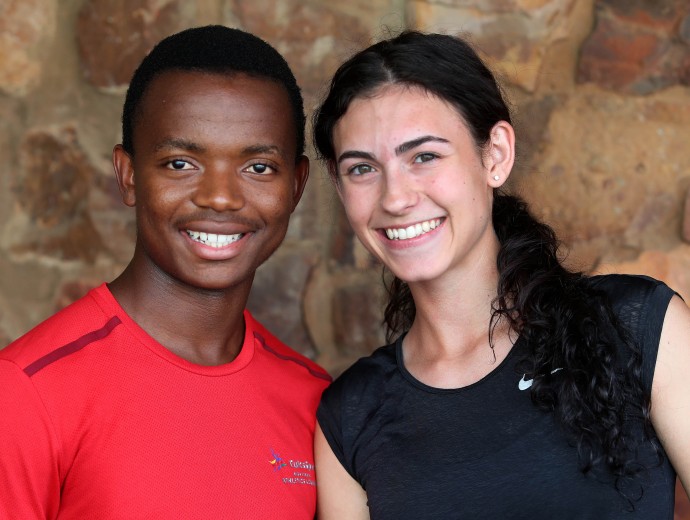