#TuksSwimming: Schoenmaker has not decided on competing at World Short Course Championship

In spite of qualifying in all three breaststroke events, Tatjana Schoenmaker (Tuks) will in all probability not compete in December at the Fina World Swimming Championships (25m) in Hangzhou, China.
Rocco Meiring, her coach, said no final decision has been made, but he reiterated that Schoenmaker’s studies are at the moment her main priority.
“Tatjana and I still need to sit down and discuss the way forward. Our plan has always been that she should have a degree by the end of 2019. From a coaching perspective, she needs to do a big block of intense training. If it is decided that she will compete at the World Short Course Championships (25m) the question remains as to when she is going to do the long hard hours in the pool. The best would be if we could do so from now until February next year.
“If I got, to be honest, I got to admit that we have not been doing the necessary training to ensure that Tatjana will be truly competitive over 25 metres. Our focus should have been more on power and speed work, and that is not what we are focussing on at the moment. The other reality is that Tatjana is not a good short course swimmer. Her turns are not effective enough.”
During the recent South African, Short Course Championships Schoenmaker won the 200m-breaststroke (2:18.93), the 100m-breaststroke (1:05.12) as well as the 50m-breaststroke (30.39). Her effort in the 50 metres is a new South African record.
Meiring said the main aim during the national championships was to evaluate Schoenmaker to see where she is at after the Gold Coast Commonwealth Games.
“I am satisfied with her performance over 200 metres. I was hoping she would be a little faster in the 100 metres. Tatjana and I have not spoken about the 50 metres. However, I was hoping she would dip under 30 circumstances. Overall I am satisfied especially considering that Tatjana’s personal life has slightly been in turmoil since she returned from the Commonwealth Games.”
As far as the other Tuks swimmers are concerned Meiring is impressed with Ruan Ras’s performance. He raced to victory in the men’s 400m freestyle clocking 3:50.48. According to Meiring Ras just missed out medalling in some of the other events he swam.
“Overall I think this championship is going to be a turning point in Ruan’s career. He now realises what he is capable of.”
Ras is one of the real fighters of SA swimming. In 2011 he was diagnosed with cancer. He was never going to allow the “Big C” to get the better of him.
The Tuks swimmer said he never worried about dying when being told he had cancer. It was more a case of him being upset because he was not able to swim while undergoing chemotherapy.
Duné Coetzee won the women’s 200m butterfly medal in 2:13.31. The Tuks swimmer was also third in the 800m-freestyle. Later this year she will be representing South Africa at the Youth Olympic Games.
Christin Mundell (Tuks) who will also be competing at the Youth Games were third in the 200m-breaststroke.
Meiring tips Ruan Breytenbach, Zander Landman and Samantha Rundell as youngsters to watch judging by their performances during the championships.
- Author Wilhelm de Swardt
Published by Leonore Jordaan 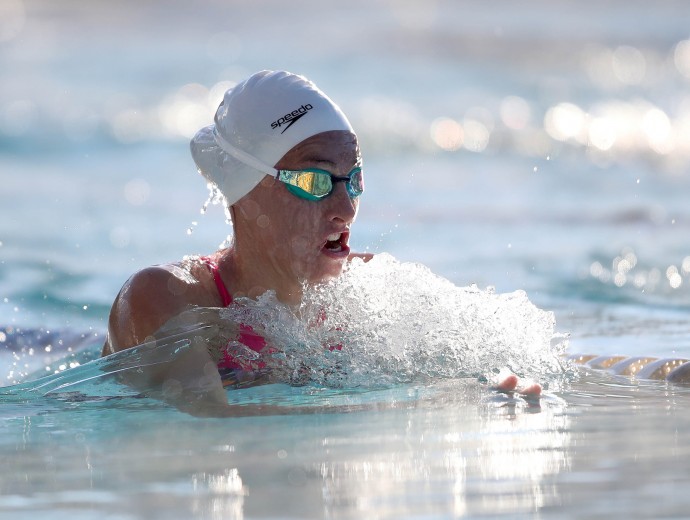