#TuksAthletics: It is mission accomplished for Simbine after winning gold in Nigeria

It was mission accomplished for Akani Simbine yesterday when he won the 100m at the African Athletics Championships in Asaba, Nigeria.

At the beginning of the year, the Tuks sprinter made it clear that he had only two goals for the season. The first was to won gold in the 100m at the Gold Coast Commonwealth Games and the other to be the African champion. He accomplished both.

His reasoned that he had nailed running sub ten seconds in the 100m over the last three years to fine art and that it is high time that he should start winning titles as it was the one thing that was missing from his impressive sprinting CV.

However, being Simbine, it should be no surprise that he now has set himself a new challenge that is to win the 100m at the IAAF Intercontinental Cup in September.

After winning the 100m during the Africa Championships Simbine has supposedly qualified for next year’s World Championships, but in the past, this proved to be no guarantee. If he wins at the Intercontinental Cup, he would have qualified for the second time.

Prinsloo is of the opinion that if Simbine can get the qualification now out of the way it would mean that next year their only focus will be to peak at the World Championships as the Tuks sprinter won’t need to compete in unnecessary races.

According to Prinsloo, he was impressed by how Simbine managed to remain focused during the African Championships. Especially considering the hours and hours travel ordeal the athletes had to through to get to Asaba. The racing conditions were also far from ideal.

“The track is quite bouncy and uneven which makes it difficult for the athletes to perform to the best of their ability. That is why most of the winning times are relatively slow. During the 100m-final the athletes had to contend with quite a strong headwind also. If one takes all of this into account I think Akani has done well to win in 10.25s,” said Prinsloo. 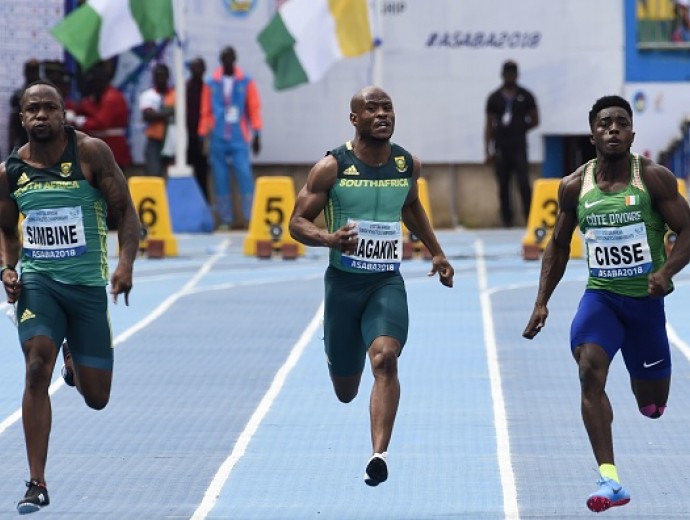 Photos: Simbine and Magakwe fight it out in the 100m final. Photo by Pius Ekpei/AFP/Getty Images: teamsa.co.za