#TuksAthletics: Erasmus wants to be SA’s sixth sprinter to dip under 10s

One of the impressive statistics in South African athletics is that since 2014 there was at least one new sprinter who had managed to break the 10 seconds barrier in the 100 metres.
Simon Magakwe (9.98s) did so in 2014; in 2015 Akani Simbine and Henricho Bruintjies both ran 9.97s; in 2016 Wayde van Niekerk ran 9.98s. Last year Thando Roto clocked 9.95s.
Judging by what happened over the past weekend the Tuks sprinter, Emile Erasmus looks set to continue the proud tradition. At the Resisprint Meeting in Switzerland, he ran 10.01s in the semi-final. In the final, his time was 10.02s. What made his performance remarkable is that the two races were within three hours of each other. The week before in Copenhagen Erasmus clocked 10.11s which shows that he is definitely in form.
But then again to improve by 0.03s over 100 metres does not just happen. Simbine can vouch for it. In 2014 in the same race Magakwe made South African athletics history by becoming the first sub-ten second's sprinter he ran a time of 10.02s, but he only managed to break through the 10s barrier the following year.
Frans van Rooyen who coaches Erasmus admits that his athlete is in for a tough challenge to find the extra speed to improve by a mere few hundredths of a second however he believes the secret to doing so lies in the execution of the race.
“Any good athlete should know what he had done from the start to the finish of his race. If he does not, it was a waste of time. One of the reasons why Emile is continuously getting faster is because he can remember exactly how he executed each of his races. Afterwards, he knows what he did right and where he erred, and that makes a big difference. Emile does not have to ‘reinvent the wheel’ when he races it is a case of adjusting small things in his technique.
“Something that excites me about Emile is his fighting spirit. In Sunday’s final the moment he got challenged by China’s Xie Zhenye he managed to dig deep for one final surge of speed to ensure that he wins.”
According to Van Rooyen, the last few years had not been easy for Erasmus and his family. An easy option for him would have been to quit sprinting and to take up sevens rugby which is another of his passions.
There can be no arguing that he will be a definite asset to the Blitz Boks being 1.93 metres tall and weighing about 100kg especially and being as fast as he is. The salary he would have earned playing rugby certainly would have helped his family.
“Emile chose to keep on sprinting because he believes he has what it takes to become a top international sprinter who can go under 10 seconds and he is goal driven. Once he has put his mind to something, he won’t stop until achieving what he set out to do.
“There are specific challenges in coaching a big sprinter like Emile, but nothing is insurmountable. We work from phase to phase to ensure he keeps on getting faster. At the moment he is quite fast of starting blocks but we need to work on is his speed over the last 30 metres."
- Author Wilhelm de Swardt
Published by Leonore Jordaan 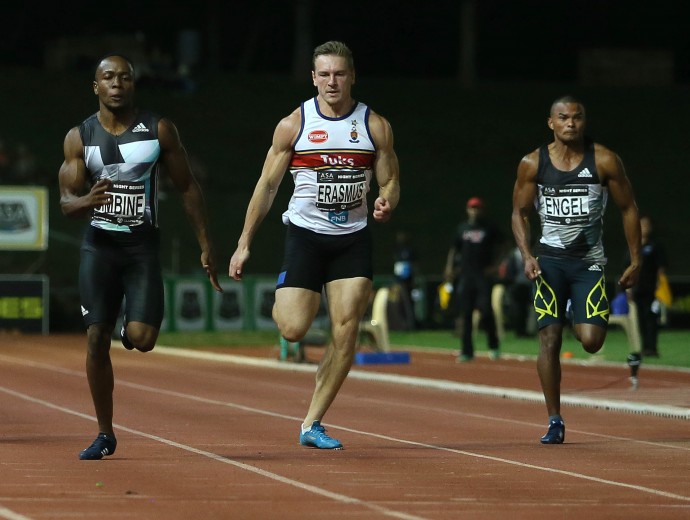