Rikenette Steenkamp (Tuks) set a new South African record last night during Memorial Josefa Odlozila Meeting in Prague when she ran 12.91s in the 100m-hurdles.
If ever an athlete deserved to break Corien Botha’s 21-year-old record of 12.94s it is Steenkamp. She has been on a  “hunt” for it since last year. The Tuks athlete, in fact, did run a faster time during the Resisprint International Meeting in Switzerland winning in 12.92s. Unfortunately, the wind from behind was too strong for record purposes.
There is a real story of perseverance to be told about Steenkamp record-breaking run. In 2016 she had to relearn how to walk correctly after undergoing an operation to remove an extra bone in her ankle. As part of the rehabilitation process, Steenkamp was confined to bed rest for six weeks. Swimming was the first proper exercise she was allowed to do.
Last night the former junior world champion, Elvira Herman (Belarus), won the 100m-hurdles in 12.69s. Steenkamp was second with Luca Kozák (Hungary) third in 13.04s.
The Tuks athlete did not have the best of starts. In spite of being second last out of the starting blocks, she was in the lead going over the first four hurdles.
“To at long last break, Corien Botha’s record was amazing. I have dreamt doing so for the previous seven years. What excites me is that it was not the perfect race. My technique going over the first four hurdles was possibly the best I have ever done. But I was coming so fast onto the hurdles that it led to me losing a bit of rhythm. Then I hit the sixth hurdle. I can’t remember when last that happened.
“I was quite emotional afterwards especially when I met up with my coach, Hennie Kriel. I owe so much to him for the way he guided me to break the record,” said Steenkamp who will be racing again on 14 June in Herouville, France.
Since last year the Tuks athlete has competed in six races in Europe. She has won four of the races and finished second twice.
Thando Roto (Tuks) finished fifth in the 100m last night running 10.17s. His time in the heats was 10.24s. It is only his third race since winning a silver medal last year at the World Student Games in Taipei.
“I am quite excited to see how the season is going to go. For now, I can’t complain. To be racing alongside Mike Rodgers (USA) when he set a world lead running 9.92s will always be a special memory.”
Henricho Bruintjies finished fourth in 10.11s.
Cornel Fredericks (Tuks) is slowly but surely starting to find the form which saw him winning gold at the 2014 Commonwealth Games. He finished third in the 400m-hurdles in a time of 49.42s.
The world youth champion and record holder, Sokwakhana Zazini (TuksSport High School), impressed finishing fourth in a time of 49.56s. It was the first time he competed internationally in a senior race.
The South African champion, Orazio Cremona (Tuks), was sixth in the shot put with a distance of 20.45m while Zarck Visser was second in the long jump with a best effort of 8.00m.
- Author Wilhelm de Swardt
Published by Leonore Jordaan 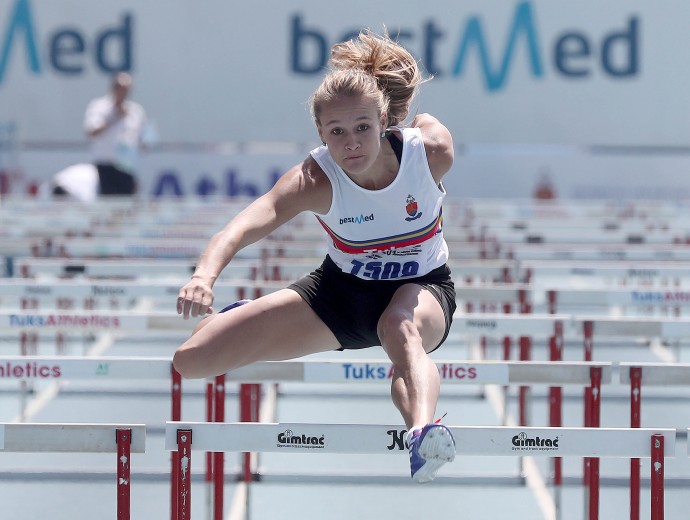