#TuksAthletics: Steenkamp can set a new SA record in the 100m-hurdles

Rikenette Steenkamp (Tuks) is going to set a new South African record in the 100m-hurdles the question is just when she is going to do so.

On Saturday during the University Sports South Africa Athletics Championships in Sasolburg, she won in a time of 13.04s which is just 0.05s slower than her personal best time which she set last year running 12.99s.

Steenkamp has purposely chosen to have a more conservative start to her season this year. Saturday was only the third time she raced. It is exciting to note that she has been able to run a faster in each of her races. At the end of March in her first race she ran 13.24s in Sasolburg, two weeks ago in Potchefstroom she clocked 13.13s and now her time is 13.04s. It means she has improved by 0.10s with each race.

“I think I have made a wise decision to race less locally as it means that I will start my European campaign fresh. I got a whole month to train before my next race which is 4 June in Prague.”

During a meeting in Switzerland, she ran 12.92s which were 0.02s more quickly than Botha’s national record. Unfortunately, the wind from behind was measured at 2.01m/s which mean it was too strong by 0.01m/s for Steenkamp’s time to be official.

The Tuks athletics team had a dismal performance at the USSA Championships finishing fourth overall. Northwest Pukke won, with the University of Johannesburg second, Kovsies third.

What counted against Tuks was its lack of depth outside the sprint events. Northwest Pukke won gold medals in 12 events with the University of Johannesburg’s athletes being victorious in nine. Kovsies won seven while Tuks only won five gold medals (all sprint or hurdling).

**Sokwakhana Zazini (TuksSport High School) is busy setting up an impressive record when it comes to winning local races. 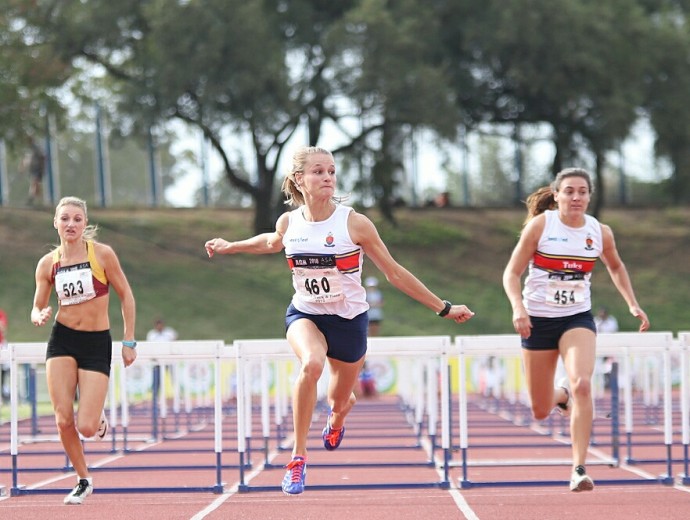