#TuksAthletics: LJ van Zyl decides to put his spikes away for good

All good things do come to an end. So it should be no surprise that the South African 400m-hurdles record holder, LJ van Zyl, has decided to put his spikes away for good, bringing to an end an athletics career that spanned nearly 17 years and included winning three Commonwealth Games medals and two World Championships medals.

Sometimes after an athlete has retired, they cannot help but wonder if it was the right decision. Van Zyl has no regrets.

“I had a wonderful career. There were magic moments on the track. For me, athletics has always been about more than just winning and clocking fast times. Through my travels from race to race, I got to see the world and meet wonderful people some of them will be friends for life.”

According to the Tuks-athlete, the main reason he decided to retire is that the “butterflies” are gone.

“Every athlete knows that feeling that when you line up to race, it feels as if butterflies are fluttering in your stomach. That moment is all about a sense of excitement, adrenaline and nervousness as you never know how your race is going to play out. That feeling has gone. On the last few occasions, I felt nothing. I just raced going through the motions.

"I always said to myself that I would never just race for the sake of racing. Don’t get me wrong I am still passionate about athletics especially the 400m-hurdles, but the magic has gone.

“The other reason why I am retiring is that our second son will be born in June.”

According to Van Zyl athletics has certainly changed his life for the better.

“Athletics helped me overcome polio, and I got to meet my wife, Irvette, in 2004 at the South African Junior Championships in Bloemfontein.”

Not racing does not mean that Van Zyl is finished with athletics. If he has his ways he will be involved for years to come. He is looking forward to the new challenges he has set himself.

“I honestly feel that I can be an excellent mentor to young athletes and not necessary only track and field athletes. One of the most important things the youngsters should realise that it is nice to be fast and be a champion but it is not going to last forever. If you lucky you might be competitive for five to ten years.

"The question young athletes need to ask themselves is what they are going to do when they retire. Throughout my athletic career, I was studying. I am currently busy with my master’s degree. I think every athlete should think about studying something,” said the Tuks-athlete.

Patience is the one thing Van Zyl wants every young aspiring athlete to have.

“I wanted to retire in 2010 as I was struggling. I only won gold at the national championships as well as the African Champs. In the rest of my races, I was struggling to find my form. But then I surprised myself by winning the silver at the Commonwealth Games. That made me realise that I still got what it takes to beat the best, so I carried on."

In 17 years there were many highlights but Van Zyl considering his South African record-breaking attempt in 2011 at Tuks as a definite highlight. He clocked 47.66s. Another highlight was dipping under 48 seconds for the first time.

Van Zyl considers Bershawn Jackson to have been his toughest rival.

“Bershawn frustrated me. Not only because he is so much smaller than me, but he also has a bad hurdling technique still he was victorious on most occasions when we raced. I don’t hold it against him. We are still good friends.”

In his career Van Zyl managed to clock an astonishing 108 sub 49.50s races in the 400m-hurdles. It is the benchmark to being considered a good 400m-hurdler. He has gone under 49 seconds on 68 occasions and dipped under 48 seconds on six occasions. In 2002 he was the World Junior Champion; in 2006 he won a gold medal at the Melbourne Commonwealth Games as well as helping the SA 4x400m-relay win silver; in 2010 he won a silver medal at the Commonwealth Games; in 2011 in Daegu he won a bronze medal at the World Championships and again helped the SA 4x400m-relay to win a silver medal. 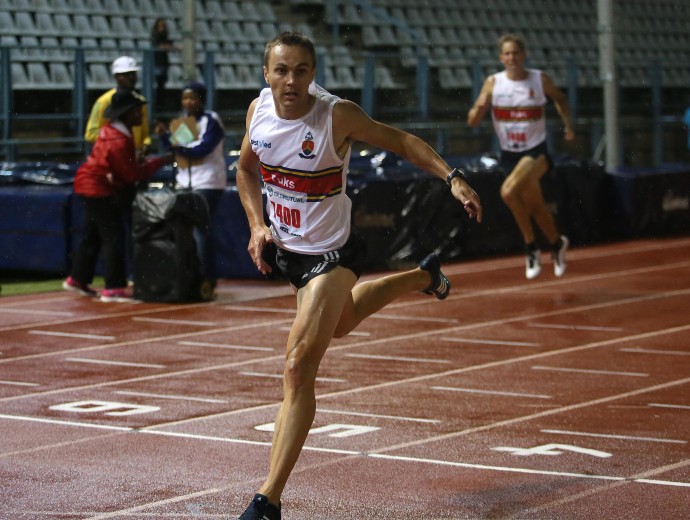