For the second consecutive Commonwealth Games, the South African 4x100m-relay team set a new national record. However, the big difference this time around is that they also got to win the silver medal.

It was a real team effort by the South Africans, but the way Akani Simbine ran the last 100m does deserve a special mention. It was brute poetry in motion. Simbine was about the third athlete to receive the baton on the last changeover. For a moment it looked like the South Africans were going to miss out. But once the Tuks sprinter got into the full flight, there was no stopping him. He moved from fourth to third to second in mere metres. Unfortunately, there were not enough metres left to catch England’s Harry Aikines Aryeetey.

England won the relay at the Gold Coast Games running 38.13s. South Africa was second in 38.24s. It is a massive improvement on their previous record of 38.35s set during 2014 Glasgow Games. Jamaica was third in 38.35s.

Afterwards, an elated Simbine said it was an honour for him and his teammates to win the medal for South Africa.

The Commonwealth Games 100m champion, Simbine, admits to being surprised by his burst of speed.

“I knew I could finish strong, but I did not realise that I would be so fast. It is just the beginning of the season, and with my top end speed being this fast already, I cannot help to be excited about what I still possibly will be able to achieve.

“My main motivation the moment I received the baton was to win a medal for South Africa. What helped was that I was becoming aware that Yohan Blake was starting to accelerate and coming up next to me. I thought to myself there is no way that I am going to allow him to catch up with me,” said the Tuks sprinter that has managed to outsprint the Jamaican on two occasions during the Games.

It is something he could not do in their previous three encounters.

The silver medallist in the 100m, Henricho Bruintjies, is of the opinion that as a relay-team they are capable of running even faster times.

“We managed to train together a few times during the Games which certainly helped, but we if we can do so more often there is no telling what we will be capable of. As they say, practice makes for perfection.”

Anaso Jobodwana (Tuks) who got disqualified during the 200m heats said his biggest concern was that he might be the one that also gets the team disqualified in the relay-final.

“I am relieved that I did not do so. Winning a silver medal somewhat makes up for my disappointment of what has happened in the 200m.”

Emile Erasmus (Tuks) who came in as a replacement was full of praise for how his teammates raced.

“It is a great honour for me to be racing with them especially since they are so passionate about what they are doing.” 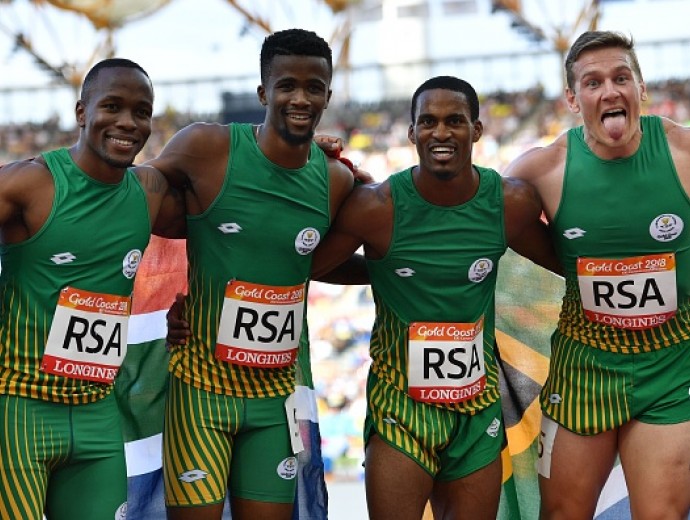