South Africa’s 4x100m-relay team won their heat this morning at the Gold Coast Commonwealth Games, but they will have their work cut out if they want to contest for a medal in tomorrow’s final.
The team’s medal hopes so nearly got derailed on the second change over between Emile Erasmus and Anaso Jobodwana. Luckily they did not drop the baton. The Commonwealth 100m champion, Akani Simbine, impressed with his powerful acceleration over the last 50 metres, catching up and passing Australia’s Josh Clarke to book South Africa’s place in the final.
The South Africa team (Henricho Bruintjies, Erasmus, Jobodwana and Simbine) clocked 38.71s with the Aussies second in 38.78s.
The times in the second 4x100m-relay heat were much quicker. England won in 38.15s, with Jamaica second in 38.44s and Nigeria third in 38.52s.
So it would seem that the South African relay-team will need to come close to running a national record time of 38.35s if they want to have a realistic chance to medal.
Erasmus (Tuks) who only got to hear last night that he will be running the relay is of the opinion that he and his teammates are capable of running a faster time.
“Because of a slight misunderstanding between Anaso and me we lost a few valuable hundredths of a second in the changeover. We will work on it today. If we get that sorted, I am sure we will run a faster time in tomorrow's final. It is amazing to be in a relay-team with ‘okes’ who are so committed to succeeding. We all got one goal, and that is to win a medal for South Africa," said the Tuks sprinter.
- Author Wilhelm de Swardt
Published by Leonore Jordaan 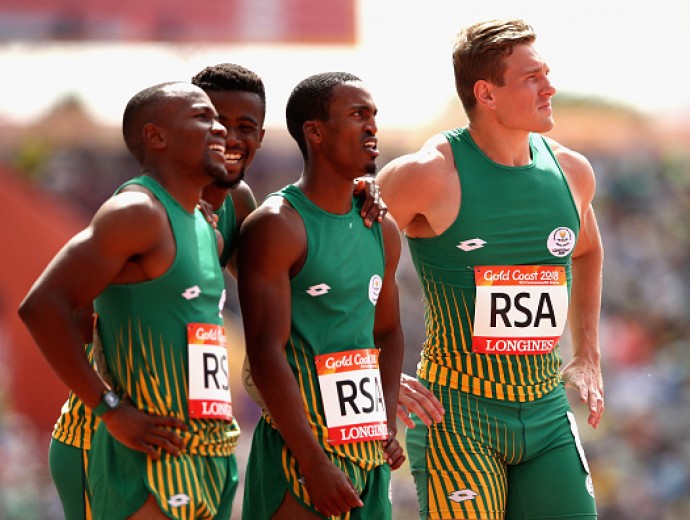