Akani Simbine and Henricho Bruintjies lived 'cometh the hour, cometh the men' on Monday afternoon, during the 100 metres final of the Gold Coast Commonwealth Games, when they raced to win the gold and silver medals respectively.

It was a sensational performance, in which they managed to totally upset the form book, proving that South Africa has truly become a power in international sprinting, even when Wayde van Niekerk is injured.

It is the first time that a South African sprinter has won the 100 metres final at the Commonwealth Games. Simbine won in 10.03s with Bruintjies second in 10.17s. The sad story of the day was that of the pre-race favourite, Yohan Blake (Jamaica), who finished third in a time of 10.19s. Unfortunately for him, he had a slight stumble right at the start of his race, from which he could not recover.

‘Humbled’, was how Simbine described his feelings after winning a gold medal at a major event. ‘My smile should tell the story of how happy I am to win a medal for South Africa. I did today what I knew for a long time I was capable of doing, and that is to win the gold,’ said the Tuks athlete who came fifth at the 2014 Games in Glasgow.

‘I got to dedicate my gold medal to my team that believed in my abilities. My coach, Werner Prinsloo, deserves a special mention for all the hard work he has done to ensure that I keep on getting faster. I also got to thank my family for their support,’ he said.

Simbine said he was focused on running his own race. ‘Not for a moment did I think about what Yohan might do, because I can’t control that. I only started to take note of what was happening during the race at about 60 metres. When I could see nobody over the last few metres, I put up my arm in a celebratory salute.’

He said he hopes that his performance will inspire every young sprinter in South Africa to believe that anything is possible if they are prepared to put in the hard work.

Bruintjies meanwhile battled to believe what he had achieved. ‘It was my first major final and I so nearly did not get to race it. I qualified as the fastest loser. I had one race plan only and that was to stick to Simbine. I knew if I managed to do so, I would get a good result. It worked.’

The two South Africans raced in lane seven and eight.

Asked if he thought that at long last he had got the “monkey off his back”, Bruintjies who trains at Tuks said: ‘I think the “monkey” jumped right back on as I achieved something totally unexpected.’

Now they have their sights set on gold medals for South Africa in the 4x100m-relay. 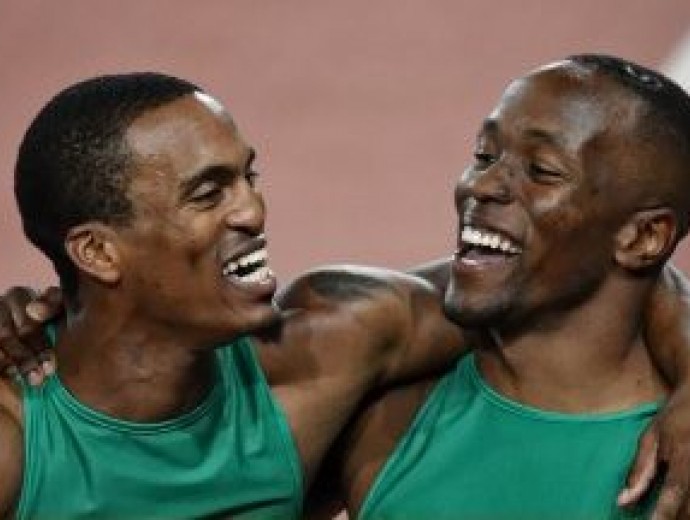